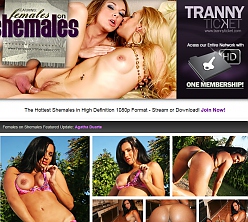 Women are curious creatures. Sliding more readily along the Kinsey scale, allowing for sexual attraction and interaction with both men and women, it is said that most women are bisexual, just to varying degrees. As far as the women of Females on Shemales are concerned, well, quite frankly, I'm throwing out the book on sexual classifications, guys. Pornstar women sucking and fucking former male, now female transsexuals who haven't yet completely joined the fairer sex (i.e.: they're pre- not post-op) - that's something you surely don't see everyday, not even on the World Wide Web of sexual debauchery. Stand up straight and pay attention, 'cause Females on Shemales has got something to say!

With videos reaching an impressive 1280x720 pixels and looking fine indeed, HD fanatics are fairly well looked after here at Females on Shemales. Streaming videos are also available, as are secondary download options and all look quite decent.

Photo content hasn't been neglected by Females on Shemales' webmasters. Not only does each gallery provide a zipped collection of all its photos for easy downloading, but those photos as well as those on the gallery pages reach a very detailed peak resolution of 1600px and give you great views enabling you to see who's doing what to whom and how.

Cons:
The ever watchful eye of this reviewer has noticed that the dates attached to the most recent Females on Shemales scenes go back a few months to October of 2011. Does this mean the site is no longer adding new content or is this just a temporary break before a tsunami of new scenes? Only time will tell for sure, but it's not looking good, folks.

Now that updates have apparently ceased, the existing archive, all 63 scenes of it, can't hope to completely fill that lusty, dusty realm of Females on Shemales' members' sexual curiosities. Those same members will no doubt end up relying far too heavily on the Tranny Ticket network they've been given access to.

The Females on Shemales tour pages made prominent mention of 1080p High Definition video formats, yet none have been provided inside the members area. Whether this format was a planned upgrade that never happened or an outright attempt to deceive potential members, it's hard to say.