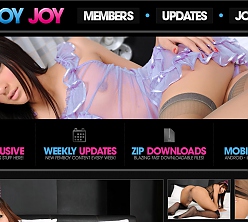 Overview:
The seemingly endless variation of human sexuality offers untold promise for pleasure. Pretend you're living in the late 50s and just discovered the existence of bisexuals. Once over your socially-embedded homophobia, you'd probably remark that bisexuals are spoilt for choice when you, the staunchly hetero bread winner of a typical American family, only have one option (that sleeps in a separate bed). Imagine then how folks of yesteryear must view the models of Femboy Job, a site focusing entirely on beauties born male but identifying (and dressing and fucking) as female! Femboy Joy has been online less than a year but looks pretty good from the outside nonetheless. Boasting of its weekly updates and blazing fast downloads, and teasing us with some tantalizing shots of the sexy femboy models, Femboy Joy appears to be a rare treat indeed.

Imagery looks quite good throughout Femboy Joy with photos reaching 2000px both online and in downloadable zip sets. Videos might not be threatening any HD-equipped sites, but they generally show the ladyboys and action both clearly either in online streams or downloadable MP4 files.

A strong helping of bonus content will keep most members happy between Femboy Joy updates - something new is added to the main archive roughly every five or six days. Included is access to a selection of live webcam shows

Although Femboy Joy is allegedly focused on biological males identifying as females, some models don't quite fit the bill and sport feminine features that could only have been attached on an operating table. (All models have do dicks, though!)

It's unclear whether Femboy Joy's content is original or exclusive and this reviewer suspects it is not. Clearly aged videos lack supporting watermarks - they often lack site watermarks completely - and the featured models are no strangers to sites of this nature and stature.

All zipped galleries are called "Photos.zip" and, when downloaded, will all unzip into the same folder causing file name problems galore. ProPornTip: rename with the model's name before downloading any zip and you'll save yourself a lot of trouble.

Conclusion:
Like its gender-bending models, Femboy Joy never had a clear path to success. Battling against mainstream sexual fashion and a restricted marketplace, it has taken quite some time for a site like Femboy Joy to be a viable enterprise. Now that Femboy Joy is online, however, it's time to reassess this little miracle of carnality. Devoid of any High Definition video content comparable to that of its competitors', hosting content of questionable exclusivity, and letting the updates slip from their weekly schedule, Femboy Joy doesn't exactly inspire unrestrained confidence in its would-be members, but it will inspire something unavoidably telling: an erection. Like some of its models, I'd say Femboy Joy could stand something of a makeover.