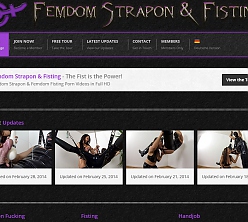 Cons:
Videos are available for download, but no streaming viewing option has been provided. Most scenes have also been split into multiple parts (usually two or three) which makes downloading and viewing a complete scene far more demanding than it should be.


Image galleries appear to hold not photos but screencaps pulled directly from the accompanying videos. Zips are provided for easy download, but only three or four images per set can be viewed directly on the site. Online galleries and strong photo content would definitely improve things here.

Women are generally pushing towards GILFdom and probably won't set your loins ablaze like Keisha Grey or Kennedy Leigh's youthful exuberance and physicality will. The camera doesn't exactly flatter Femdom's whip-wielding ladies, either, capturing every severe wrinkle or drooping flabby chunk of flesh.