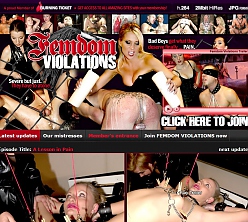 Ever thought about switching to the other side? No, I'm not talking about mackin' on some bros down at the local watering hole, just surrendering your hyper-aggressive masculine tendencies in favor or being some hot, powerful dames bitch-boy. If the answer is "yes" (or even "not yet, but now I'm thinking it might not be such a bad idea…") then Femdom Violations is for you. Sure, some scenes show women dominating other women, but the focus usually remains on submissive men and the dommes that oppress them and utterly destroy them physically, mentally, sexually, all for your entertainment. Ain't nothing wrong with that, fellas!

Those familiar with Burning Ticket's various kink-fests know by now that the network is entirely a German operation. That means you'll be hearing German dialog in the scenes and won't know what the fuck they're talking about. Unless, of course, you speak German.