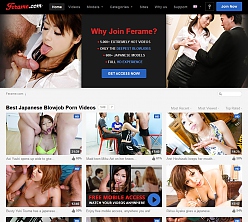 Updates don't appear to arrive on a strict schedule at Ferame, though they do arrive frequently, in bursts of near daily installments that peter out but are soon followed by another. Each contains both video and photo content, the former streaming and downloading at 720p and 1080p HD much of the time. Much of the HD content looks fantastically fresh, vibrant, and clear, but most importantly it's uncensored.

Mr. Pink's is again pleased to provide you, dear reader, with discounted access to Ferame for $19.99, thirty bucks off the usual price. There is, however, a catch! Join Ferame and you're really joining the entire JAV HD Network, all 16 sites of it. Loaded with thousands of hardcore J-porn scenes, most of them HD and all of them uncensored, that's one hell of a bonus!

Ferame's photo galleries contain what appear to be very high quality screencaps pulled from the corresponding videos, not still photographs at all. Hey, they still look and are a damn sight better than most screencap galleries, but HQ photos they are not. Still, with resolutions hitting 1920px and zipped downloads provided, it ain't all bad.

It's not unusual to find a scorching hot Ferame face-fucking scene and then, when roaming the rest of JAV HD's network archive, see it again with a slightly different title, maybe an adjusted run time to benefit the theme of its second online home, or some post-production trickery to make it shine or glow or dim in a different way. A dupe, however, is still a dupe.

The video format information provided alongside stream and download links is not always entirely accurate here at Ferame. More than a few times I downloaded what I expected to be a 1080p video only to find it was 720p playing locally. Better, more accurate video labeling would be great to see in place at Ferame and across the network, though it's hardly a deal-breaking issue.