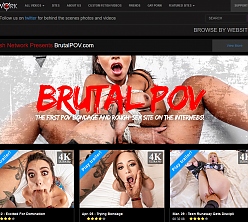 You might expect the women of Fetish Network to be largely unknowns trying in vain to break into adult entertainment’s mainstream. Not so! Fetish Network features today’s sexiest and boldest young performers, from Khloe Kapri and Alex Blake to Vina Sky, Kyler Quinn, and Natalie Brooks. The excellent videos and intense shooting style often has these starlets looking like true hot messes.

As for those excellent videos… How does both HD and Ultra-HD viewing strike you? Fetish Network’s active sites now update with 4K videos on the regular. These UHD versions look simply amazing and are a huge leap over the already strong 1080p HD versions. A keen eye for evocative shooting and dynamic camerawork makes this super-high-res site also artistically and sexually solid.

Fetish Network brings its members a somewhat irregular but still quite active update schedule that adds to its already huge back catalog of depraved smut. There’s close to 4000 scenes online and now that Fetish Network is offering new members a deal that’ll get them inside for a meagre $19.95-a-month, Fetish Network is even harder to resist than ever.

Over the years Fetish Network has moved from the leather-and-chains world of traditional bondage and kink play to what could simply be called hyper-aggressive semi consensual hardcore sex. Some male performers push things too far, the look in their eyes being far too convincing for those that don’t mind a little rough role-play but don’t want to be confronted with serious abuse play.