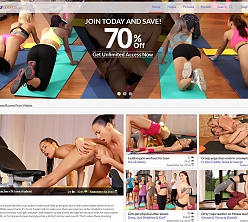 Hitting the gym to better yourself, improve your physical fitness and health, and maybe make some new friends always sounds like a sensible way to cope with a break-up. At Fitness Rooms, a brand new hardcore site from the makers of SexyHub, Fitness Rooms takes places in an anonymous European gym and yoga studio where the heat emanating from the hard-working bodies pushes some gym rats into a frenzy of arousal. The couples, trios, and groups that end up stripping out of their workout gear and rolling across the floor together bring ample heat to the HD videos and galleries and will have you ignoring real-world gyms in favor of staying home and enjoying a less strenuous, most satisfying workout with Fitness Rooms on the tube.

Overview:
To paraphrase the classic song, "Working out is hard to do," especially when you're surrounded by lascivious women dressed in skin-tight clothing that leaves little to the imagination and makes your own shorts tighten. Whether it's your local gym or an at-home TV instructor, if you're not careful your sexual frustration can reveal itself in most embarrassing ways, not only ruining any chance of hooking up with a classmate or fellow gym rat but leaving you little choice but to hit the sofa and work on releasing some tension far more effectively than crunches and curls can. If girls in yoga pants pique your interest, Fitness Rooms will grab you by the virtual sack and pull you inside for a close look at what happens when scorching hot women and studly young men thrust their sweaty bodies together in lust. From the makers of SexyHub and FakeHub, Fitness Rooms offers hardcore sex scenes ranging from one-on-one lesbian hookups to MFF threesomes, group sex, and large-scale orgies, and it offers it all in rather fetching High Definition packages. Tour pages show European pornstar babes stretching, lifting weights, kicking ass at aerobics, and holding yoga poses that inadvertently reveal camel toes and crevices that drive their trainers and fellow classmates crazy. The resulting sex sticks to Euro traditions and is shot cleanly and simply but with a slightly glamorous edge. Fitness Rooms takes place entirely within the confines of a gymnasium, so even if you can't muster the courage to work out alongside your everyday Adonis, you can now witness the fine, fighting fit women you'd otherwise be missing out on. All it requires is a $29.99 monthly membership payment and the desire to do a whole lot more than just ogle.

Pros:
Fitness Rooms has an original concept and solid execution with the gym-set scenes playing out as fairly believable hookups between fellow classmates, instructors and clients, and, on occasion, every single in the gym at a given time. Starting out with an actual exercise plan, the models can be seen stretching and thrusting before they even slide off their sports bras. Once the sex begins, things proceed with eroticism and carnality as equals.

The very sexy models appearing at Fitness Rooms include many top Euro and UK stars. Not all are identified by their full names, but many are: Cristin Caitlin, Katy Rose, Anna Rose, Emily Clark, Brianna Bounce, Noemilk, Nathaly Cherie, and Barbara Bieber. Blondes, brunettes, redheads, slim girls and thicker figures - you'll find 'em all gussied up in skin-tight pants and crop-tops at Fitness Rooms.

Shot somewhere in Europe in some European language I can't quite place - perhaps Hungarian, maybe a German dialect - most Fitness Rooms scenes deliver English subtitles so English-speakers can follow along with the dialog. Videos can be viewed in 720p and 1080p streams and downloads while photo galleries hit an awesome 4000px in downloadable zips and can also be viewed online.

Sure, the English subtitles help viewers follow along with the dialog, but since there's so little dialog, some Fitness Rooms members will no doubt decided it's all pretty skippable and head straight to the sex. The only real downside to doing so is that any dialog that amplifies the fantasy and adds even more heat will be missed and scenes can play a bit flat as a result.

Although there's mention on numerous model profiles of the SexyHub network, Fitness Rooms remains separate from that much larger smut supplier. What a shame, too, since Fitness Rooms would fit in beautifully with Lesbea, Massage Rooms, and Dane Jones. It almost seems inevitable that Fitness Rooms will join SexyHub, it just hasn't happened yet.

Fitness Rooms is bright and colorful from the beginning, the models dressed in skin-tight workout gear that seriously grips their figures. After the clothes start coming off, however, things can take a turn for the bland. Surrounded by wood-veneer floor tiles and sedate colored exercise equipment, the bare naked women usually look hotter and sluttier when they're at least partially clothed.

Conclusion:
Right away, Fitness Rooms makes a strong first impression with bold, bright colors, skin-tight outfits practically painted on incredibly foxy, athletic women. Deeper into the site, you'll find that only 24 scenes have been uploaded, leaving this very promising site more than a little short on content. What is online at Fitness Rooms pretty much rules, though. The women are eager and engage fully whether with a man or another woman or a combination of both, resulting in fairly steamy sex that, quite frankly, is only made hotter when the performers are left partially clothed. Pulling a thong leotard to the side in order to start fucking stays true to the concept of the site, makes it more believable, and keeps rings visually interesting and quite colorful. High Definition 1080p videos can be streamed or downloaded, as can the similarly high-res 4000px photo galleries. When fully naked, the skin tones of the models can turn a bright and lively scene into something far more drab, but that's not exactly a consistent problem. Quantity is where Fitness Rooms falls short (though inclusion in the SexyHub network would help that) and the only thing that can improve such an issue is time. Unless you're a die-hard workout-porn freak, perhaps it'd be best to visit Fitness Rooms in a few months.