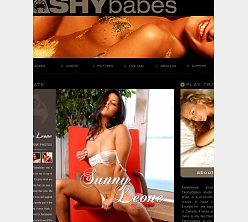 The ‘flash’ in Flashy Babes’ name could be alluding to the flash of the camera as it catches yet another glimpse of these beautiful young models or it could allude to their flashy personalities, which are certainly evident within the site’s walls. Or it could be a reference to the fact that they, yes, flash various parts of their nubile forms in front of the camera. Does this mean the site is a home-run? Nope, but it does mean that it’s at least an attractive bunt.

Intro:
There are two kinds of stunningly beautiful women: the kind that don’t know it and reject compliments (like Jamie Lee Curtis in True Lies), and the kind that not only know it, but flaunt it at any available opportunity, making sure to impress upon anyone and everyone that they’re special (like Megan Fox in Megan Fox’s life). The women of Flashy Babes might not be as obnoxious as the latter archetype, but they surely know just how exquisite they are. Touching upon almost all physical types (busty or flat-chested, curvy or athletic, blonde or brunette - the Flashy Babes, uh, babes seem to have no problem exposing themselves and their subtly flamboyant sexuality before a camera lens. Lucky you, you get to witness them preen and pose in an extensive archive of softcore photoshoots and video scenes - but you’ll have to hand over the standard $29.95 monthly fee; unless, that is, you sign up through Mr. Pink’s, in which case you’ll bring the cost down to just $14.95. That’s a saving of more than 50%! Apart from delivering bargain deals, we here at Mr. Pink’s love to teach you anything and everything you might need to know about a site, so sit your ass down and pay close attention.

Pros:
Flashy Babes isn’t a name that was arbitrarily chosen from a long list. These ‘babes‘ certainly do ‘flash‘ their pink bits! Although this site is definitely of the softcore variety, the ‘babes‘ seem to enjoy getting a little rowdier and raunchier than many gussied-up glamour girls.

Want to find out more about these gorgeous models? Dude, that’s what the decked-out profile pages, producer comments, messages from models, behind the scenes and interview videos, and Q&A sessions are for! Dig in and discover all there is to know about the flashiest babes this side of Flash Mountain.

The photo content is of a high quality with shots regularly reaching 1200px or thereabouts. Lighting and framing is all top notch and it looks like one of the production assistant’s many odd jobs involves holding an electric fan to give the models that wind-blown, slightly exotic look.

Cons:
Images are only provided in one resolution and while it looks quite good it certainly can’t compete with the huge shots offered by many similarly-themed erotica sites. Those sites usually host three different image sizes which can be viewed online or by a downloadable zip archive. Does Flashy Babes have zip archives? No. No it does not.

Hey, the site looks a treat! That’s great, but what about navigation? Well, chums, the proprietors of Flashy Babes seem to think that you don’t need any browsing assistance and have neglected to provide any search function, keyword tag system, nor a model name search.

Updates are not dated and there’s no main update index, just separate ones for the photo and video archives. Unfortunately, this makes it kinda tough to find out whether new content arrives daily, weekly, monthly, or what.

While some models seem to relish the opportunity to show off every part of their physique that they would normally be forced to conceal - damn you, societal constraints - others barely show any skin at all. These more timid girls will strip down to underwear and maybe, just maybe, expose their breasts, but they often use a hand-bra (as made famous by Sarah Michelle Gellar on Saturday Night Live) to conceal what I’m sure are delightful nipples.

Conclusion:
Oh, Flashy Babes, I wanted to love you. Not only that, but I wanted to throw you to the floor and ravish you with my virtual sexuality. Instead, I’m left feeling like you’re the girl I took out on an expensive date only to find that you chewed with your mouth open, didn’t say “Thank you,” when I bought you drinks, and told me Charlie Chaplin “was, like, not cool.” That’s the kind of disappointment we’re talking about here with Flashy Babes. This is a site that promises, explicitly and implicitly, to deliver ‘the goods’, but really only lets you know that ‘the goods’ are probably somewhere else.