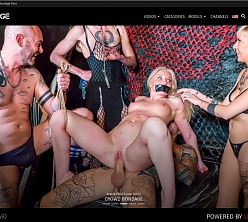 Overview:
Bondage: depending on your definition it’s either a little tying up game played in couples’ bedrooms for their own excitement or, you know, actual human slavery and trafficking. Thankfully, For Bondage is a vehement proponent of the former, not the latter, not unless the slave in question has requested to serve their master and eagerly devotes themselves to said master’s satisfaction. For Bondage, see, is a mini network of three sites each devoted to a different kinky take on BDSM. Crowd Bondage sees groups of people exert control over one or two women, pushing their limits beyond belief with an all-hands-on (and sometimes in) barrage of sexual attention. Special Feet Force sees a mysterious all-female German paramilitary group stockpile women solely to have access to their feet. Badtime Stories takes fantastic BDSM-heavy scenarios and concepts, bringing them to life in wildly extravagant domination scenes shot in bedrooms, parlors, backyards, and dungeons aplenty. For Bondage and its 1080p HD archive aims to tickle your naughtiest tendencies, exciting them to boiling point with extreme kink entertainment. Will For Bondage tickle your bondage-loving bone or fail to deliver the goods?

Every update landing at For Bondage brings photos and videos to members screens, the video arriving in streams and downloads of 1080p High Definition resolutions. Videos look very good for the most part, providing strong detail and powerful views of the often very physically demanding acts performed here.

Cons:
For Bondage is a very small “network” of only 51 scenes spread across its three sites. A download limit aims to keep you from hoarding more than 100 videos a month but thankfully this limit hardly matters on a site of this size. A little bonus content - or even access to the related Let’s Do It network - would make this site much more appealing.

All the smaller networks operated by the Let’s Doe it crew are genre or niche based and share little in common with each other. Still, as many of these networks are indeed pitifully understocked, maybe some cross-genre freebies would benefit members of all sites and bring in new members eager to explore.

The photo galleries provided with For Bondage updates are, well, quite disappointing. Holding an average of six shots at 1920px and offering zipped downloads, the galleries only provide a brief overview of the scene and could very easily be expanded to a much more satisfying photo effort.

The webmasters of For Bondage have neglected to include dates of upload on each scene, leaving members to wonder just how long said scene has been online. Without dates, it’s difficult to accurately determine just how frequently this mini network is adding new material. From the looks of things, updates could have even stalled in mid 2018.