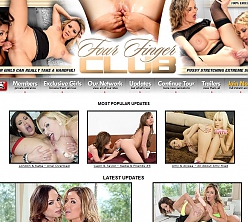 Gone are the days when slipping two fingers between your crush's thighs while making out at the movies was your ultimate achievable sexual goal. For many women, though, their fingers remain as useful as yours were before you discovered your nifty erectile abilities. Four Finger Club showcases the digital dexterity of pornstars straight, bisexual, and lesbian, but only shoots them in a sapphic context. As they lap and lick and poke and purr their collective way through almost 400 scenes, you might start to wonder about your own effectiveness as a lover. Fair enough, too, 'cause once you've seen these sluts bring each other to new heights of ecstasy, your own style of "deep dickin'" might not seem quite adequate ever again.

Overview:
There's the one and two-finger salutes and the five-finger discount, but for the life of me I can think of nothing that makes better use of four fingers in cooperation than stuffing them inside the toasty warm snatch of a new female friend. Surprising or not, this activity forms a sizable portion of the lesbian pornography market, of which New Sensations site Four Finger Club is a vibrant part. Four Finger Club's tour pages are filled with filthily explicit images of women including London Keyes, Sheena Shaw, and Capri Anderson, all of them going to town on each other in a feverish way many websites refuse to show, instead sticking to tepid pseudo-romantic "female-friendly" depictions of lesbian. Four Finger Club's ladies are ferocious! As part of the New Sensations network, Four Finger Club is likely to boast the same great features but will probably also suffer from similar drawbacks. Short of spending $29.95 of your hard-earned money to sign up, feast (or at least try), then leave in a frustrated huff, how can you possibly hope to find out whether Four FInger Club is the digital-dipping lesbian paradise for you? When in doubt, my friends, always think Pink!

Tossing aside the pseudo-romantic crap many lesbian sites produce in favor of explicit hardcore fucking, Four Finger Club hosts steamy girl-on-girl sex with lots of adventurous manual pleasure application. Fingers are joined in the mouths, pussies, and asses of these ladies by toys of every size, shape, and color. Pulled from a range of New Sensations DVD releases from a few different series, there's lots of variety here.

Here at Four Finger Club you'll not be left wanting for visual detail. At least, not too badly and not where more recent episodes are concerned: they reach 1024x576 pixels and are quite strong and clear whether streamed or downloaded. Photo galleries offer online and offline viewing (via zips)
at 1024px resolution.

Cons:
Falling a little short of standard High Definition dimensions, Four Finger Club's HD movies are only just HD at 1024x576 pixels. Added to this minor disappointment is the fact that numerous video download links given with more recent scenes led not to video files but to empty error pages. Bummer.

Speaking of updates, there hasn't been one here since October of last year - about four months. That's terribly frustrating for current members and future ones and ensures they miss out on some truly steaming lesbian smut that should, but won't be, coming to Four Finger Club.

Models are granted profiles that have unfortunately been left quite bare. You'll be left to wander the backroads of the Internet in search of tidbits about your new favorite girl-on-girl performers. Navigation could also be improved and streamlined for more effective browsing.