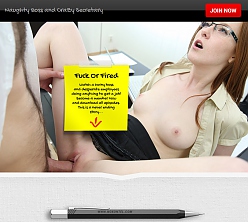 Pros:
The inter-office trysts captured on hidden spy cams for Fuck or Fired see foxy secretaries, new applicants, soon-to-be-dismissed under-performing employees, and visiting consultants all fall under the sexual spell of the head of Noxon Telekomunikace. He soon convinces them to undress, receive a massage, go down on him, and even allow him to penetrate them anally. Whether it's a new hire or his embittered wife, he sows his yuppie seed in any garden.

Whether a site has been online for decades or has just sprung forth from the mind and servers of its creator, Mr. Pink's tries to score his readers discounted memberships to all. Fuck or Fired can now be joined for $19.95-a-month - a much more suitable price for casual visiting and your first taste of Fuck or Fired.

Cons:
Holding only 11 scenes, Fuck or Fired is very, very small and won't be of a more substantial size for many months to come. Updates are not dated and a schedule bringing new content to the site has not yet been established. We must assume Fuck or Fired will continue to grow, but there's no indication how much it will grow in a certain time frame, not yet.

A truly uncomfortable and unwieldy vertical layout keeps every morsel of Fuck or Fired's archives on one long page. This suits tablets and mobile devices quite well, but desktop users will surely find it frustrating to browse and very awkward to search. Good thing there's not much here…

Photo galleries are only available in zipped sets and no online viewing option is available. You're simply forced to save the often large (500 MB) zip files on your hard drive to check out as you wish. While this is convenient for some, it's a photo-viewing nightmare for others. Online galleries are a must!

Conclusion:
Fuck or Fired must be brand-fucking-new - how else could it show its face with only 11 scenes in its archives? Even if we forgive the site its minuscule amount of available content and its complete lack of update details, there's still a few minor problems. Photo galleries can only be viewed by downloading zipped sets as there are no online galleries at all. A vertically-oriented page layout keeps all of Fuck or Fired's scenes on one long scrolling page that, while suitable for tablets and mobile devices, is uncomfortable for desktop users. Videos, thankfully, offer strong detail, plenty of color, and shots both up-close and intimate, and, conversely, discreet and removed (as if shot from spy cams). High Definition resolutions provide lots of detail and clear imagery at 576, 720, and 1080p, in both streams and downloads. The scenes aren't particularly realistic, nor are they well-acted or well-written, but they 'spy cam' shooting adds an air of authenticity that otherwise would be totally missing, at least at this point, from the brand new and seriously underdeveloped Fuck or Fired.