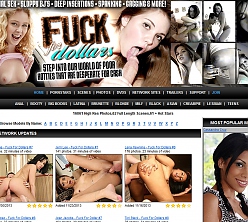 You may not have the buyers necessary to make prostitution worthwhile, but as long as they keep it from the eyes of Johnny Law, the women of Fuck For Dollars certainly do. Hell, they've got plenty of guys lining up around the virtual block just to take a peek at them picking up some temp work from a friend (or however they classify it on their tax returns). From the folks at New Sensations, Fuck For Dollars is a reality-based site that sees women accepting cash payments for sexual favors, all of which have been shot in HD and are available now only at Fuck For Dollars.

Overview:
For the past five years all we've been hearing on the news is "Global Financial Crisis-this," and "Global Financial Crisis-that," or stuff about Americans losing their homes (and dreams) to foreclosure or entire European countries collapsing because, basically, they're fucking broke. There are some people, however (let's call them 'women') who run a far greater risk of personal destitution and other people still (let's call them "babes") who couldn't go broke if they tried. They could spend all their money on partying, jaunts to Cabo and fucking handbags and there'd still be someone willing to pay them a decent price for a quick porn job - or some naked selfies, at least. That's (kinda) the premise behind Fuck For Dollars, a New Sensations website that puts to test the theory some women will do anything for money, even let a pair of strange men blow their loads rack-side. Fuck For Dollars promises you "a world of poor hotties that are desperate for cash" and whom you, if you pay $29.95 a month for the privilege, can watch in all their carnal glory. What, have you got something else on?

Pros:
Fuck For Dollars sees girls eagerly pounce on the opportunity to make some cash by dropping their drawers, exposing their tits, and getting to work on whoever's holding the dollar, dollar bills, y'all. The ladies generally agree to suck and fuck (vaginally, though some venture 'round back) for some quick cash and after a little conversation, get right down to it.

Notable performers moonlighting here at Fuck For Dollars include legends Gianna Michaels, Sasha Grey, Dana DeArmond and Tori Black alongside relative newbies like Lena Hawkins, Tia Thomas, Beverly Hills, and Jean Jacobs. The ladies catch the eyes of our cashed-up hosts and are seduced by his bill-fold before unveiling their stunning bodies and sexual eagerness to, well, you.

Shot in both objective and subjective (POV) styles and sourced from such DVD series as Busty College Coeds POV, MyPlace, and (quite obviously) Fuck For Dollars, the videos found here are quite good. Though falling short of High Definition dimensions, they reach 853x480 pixels and offer decent views of the action, as do the accompanying 1024px photos.

Cons:
Having last added new content back in late November of 2013, Fuck For Dollars could finally be on its way out of the New Sensations stable and offline altogether. And it'd be leaving in quite a sorry state, too, with a mere 62 scenes to show for all its efforts. Perhaps an endeavor requiring so much initial cash capital was doomed to fail.

The DVD releases Fuck For Dollars' scenes have been pulled from were well before the High Definition revolution took hold. As a result, nothing being hosted by Fuck For Dollars is available in HD formats and consequently looks pretty drab in comparison to more recent New Sensations titles.

The inconsistent shooting styles of Fuck For Dollars (the result of different source DVD series) could be considered a problem if you want consistent, cohesive scenes that stick to their theme and agenda quite closely. Fuck For Dollars can sometimes seem like generic hardcore without much of a pronounced cash incentive.

Photos, like Fuck For Dollars' videos, don't exactly ooze detail and could certainly stand a resolution boost from their current 1024px size. It's also occasionally the case that a scene won't have any photos at all, only screencaps; it's rare, but happened a few times during the course of this review.

Conclusion:
With nothing new added to the site for two months, it's safe to say Fuck For Dollars isn't bursting with activity like it once was. Now apparently only adding new scenes whenever its webmasters can be bothered, this New Sensations site is one of a few that has basically been retired. It's a shame, too, since many early Fuck For Dollars scenes were risque, raunchy, and quite entertaining. Nowadays, however, many other sites are not only producing better "pick-up porn" than Fuck For Dollars ever did, they're doing it in 1080p High Definiion, they're doing it every week, and they're showing no signs of slowing down and falling behind, which is exactly what Fuck For Dollars has done over the past few years.