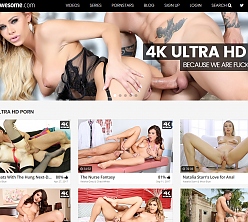 Now this is how you impress tech-loving video fiends, folks - 4K Ultra-HD video streams and MP4 downloads bring incredible detail to your screen and will surely satisfy even the most demanding viewer. Along with standard HD options, the 4K videos play smoothly and capture the sex in lusty, powerful shots. Photo galleries bring 2400px images to your screen in online galleries and zipped downloads, each as good as the other.

Adding a new scene to one of its “Series” subsides each week, Fucking Awesome is growing steadily without yet being all that large. The 68-scene archive is well worth a close examination with plenty of scorching hot scenes tucked away inside; vlogs and blogs a-plenty make good bonuses. If you want to sample Fucking Awesome before committing to full membership, the 33 free 4K videos on offer should have you convinced in no time.

Updates to Fucking Awesome arrive with evocative titles attached and preview images showing what’s in store. Scene synopses, however, are notably brief and lacking in descriptive language. Keyword tags give a stronger idea of what takes place in a given scene but the mood and atmosphere can still be hard to gauge without just watching.

The sexual and situational differences between the Fucking Awesome series tend to be minimal. With no lavish descriptions of the series themselves, we’re left to glean info from their scenes. With sex taking place outdoors and indoors, with multiple partners or one, in doctors offices and penthouses, there’s really quite little to separate each series from the others.