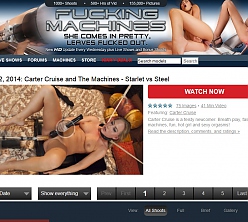 Pros:
Meeting the machines, often for the first time, Fucking Machines' performers seem delighted but a little concerned. Soon, that all dissipates thanks to the thrusting, gyrating, pulsing, and prodding the devices can muster, leaving the ladies looking like they've just been under Manuel Fererra's control for a few hours: sweaty, bleary-eyed, out-of-breath, and grinning like they've just discovered the secret to cold fusion.

Delivering High Definition videos in peak 720p resolutions, Fucking Machines offers streams and downloads to suit most viewers. Imagery looks quite strong in both the video and 1200px photo content, with close-ups showing just how amazingly aroused these eager whores get when paired with the right clitoris-slapping, cervix-prodding device.

Online for over a decade, Fucking Machines has amassed an impressive and exclusive collection of some 990 scenes and galleries. What's more, the site shows no signs of slowing down, adding another scene every Wednesday. Even though the work of other Kink sites remain off-limits unless they're paid for, Fucking Machines members can enjoy a lengthy wander around the network, exploring its many fruitful options.

Sitting online in 800px and 1200px frames and in zipped 1200px packs, Fucking Machines' photos could stand to be upgraded to higher resolutions. Likewise, the 720p videos may look very good, but they're not as strong as many other sites' 1080 offerings; a video upgrade would also be most welcome.

Many scenes neglect introductory interviews with the featured performers. This is a real shame as Kink's decision to allow the women to speak freely for themselves, declare their interests and tastes and preferences, was among the greatest elements of Kink's M.O. Interviews are included in some Fucking Machines scenes, but many go without and suffer for it.

Navigation isn't as breezy and straightforward as one might expect from such a popular and successful adult site. Kink is essentially a large network, but it charges for each site individually. This means you can roam the network and look at any preview you like, but you won't be able to view the content itself unless it's a Fucking Machines scene. Better on-site navigation for Fucking Machines would also be helpful.