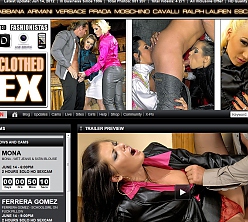 Having sex while remaining fully clothed might not be on everyone's sexual bucket list - I call mine a Fuck-it List - but those with a fondness for a well-dressed woman will certainly see the appeal of a site like Fully Clothed Sex. Well, I say "a site like" as if they are dozens of adult online vendors dealing in content of this kind; there are not. As unique as it is titillating, Fully Clothed Sex makes its home on the Tainster network and is loaded with stunning European women clad in designer suits, dresses, blouses, and glamorous evening wear who decide they love their outfits so much they won't even take them off to have their pussies eaten and then plowed by a stark naked man. Throw in some lesbian sex, group activity, and wet and messy fetish content and Fully Clothed Sex proves to be an undeniably intriguing prospect.

Overview:
As hard as it can be to determine what a given product on the shelf of your local brick-and-mortar superstore actually contains and what benefit it might provide to you, the consumer, we must remember that some companies still believe in giving their patrons a clear, concise definition of what their products are worth, what they're to be used for, and what benefits consumers should see after purchasing. Case in point: Fully Clothed Sex. Here's a site operated by an acclaimed adult entertainment network, Tainster, that is exactly what it says on the label. Sex scenes in which the female participants remain gussied up in their designer outfits while getting their rocks off in a highly lascivious style is exactly what you'd expect from a site of this name, and that's exactly what Fully Clothed Sex delivers. Such brands as Prada, Gucci, Moschino, Cavalli, Armani, and Dolce & Gabbana adorn the curvaceous, limber bodies of the featured performers as they pull their panties aside, let their nipples breath fresh air, and get down to business with whatever man or woman is presented to them. Costing its members either €24.99 or €39.99 per month (depending on their desired level of access), Fully Clothed Sex might be one of the more expensive fetish sites currently hitting its stride - convert those Euros to USD and you'll see just how expensive - but its home network and its fellow Tainster sites have all earned complimentary Mr. Pink's reviews. Will the result be the same for Fully Clothed Sex? Could this site be the haute couture of fetishistic porn? Let's get all glammed up and find out!

A new scene arrives on Fully Clothed Sex's homepage once every week and there's already a strong collection online, 268 scenes to be exact. Each new update holds photo and video content, and both look very strong in 2000px and 1080p resolutions, respectively. The HD videos are, predictably, the main focus and it's easy to see why. Strong colors, energetic soundtracks, and unobtrusive direction make for topnotch videos.

Instead of forking over either thirty or fifty US Dollars for Fully Clothed Sex access, why not take advantage of Mr. Pink's special readers discount offer; it'll get you inside this site and the entire Tainster network - access to all seventeen sites is included - for a measly €19.99, which roughly equals $25 USD.

Cons:
Navigation issues abound on the Tainster network and Fully Clothed Sex is by no means immune to these problems. Searching and browsing features are not as keenly developed as they probably could be and, in fact, the navigation system currently in place treats the entire network as one site, and each individual site as just another part of the network. (The model index, for example, automatically lists all Tainster models.)

This might be a "No shit, Sherlock" kind of observation, but the older a Fully Clothed Sex scene is, the lower the image quality is likely to be. Earlier non-HD scenes are generally not labeled as such and only reach 720x540 pixels; a far cry from 720p and 1080p HD.

Given the declarative titling of Fully Clothed Sex, I can imagine a number of viewers ending up disappointed that, in most scenes, the women performing don't actually remain fully clothed. Partial nudity is par for the course here and the exposure of both tits and ass (and pussy, too, obviously) conflicts, strictly speaking, with the premise of the site.

Conclusion:
As with most Tainster sites, there's surprisingly little to complain about regarding Fully Clothed Sex. The scenes, for the most part, stick closely to the advertised premise of the site, although some partial nudity is usually seen. Updates are streaming in at the rate of one per week and there's already a strong, sizable collection already online numbering some 268 scenes. Video and photo content look very good across the board, with only the oldest material (which is still labeled HD) falling short of 720p resolutions. An expensive site under normal circumstances, access to Fully Clothed Sex can now be had for the very reasonable, approximate price of $25 USD per month. At that price, anyone interested in watching gorgeously attired women get fucked without ditching their outfits would be mad to pass up such a golden opportunity. Then again, some people clearly take no advice from others when dressing themselves, so it's up you, dear reader. It's up to you.