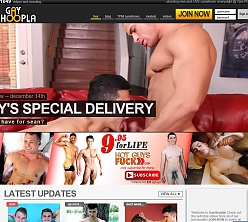 Gay Hoopla isn't a carnival restricted to practicing homosexuals, nor is it just a chaotic mess of fun and games. Home to a huge archive of live webcam broadcasts, recorded feature films, and brief hardcore encounters, all starring hunky guys eager to show off their incredible physiques, Gay Hoopla brings male-fancying viewers plenty of chances to admire, ogle, and abuse yourself to images of their stunning sexual magnetism. With 720p HD movies in tow and everyone from Country Boys to White Trash fellas getting in on the action, Gay Hoopla has plenty to offer.

Pros:
If you're after sexy guys with well-toned physiques, charming personalities, and taint-tingling smiles, guys who leap on one another with ample enthusiasm, Gay Hoopla has plenty such guys for you. From boyish guys like Kyle Dean, Aaron Dickson, Jerry Cabrera, and Sean Polo to more rugged, almost bearish types like La El, Blake Jackson, and Cole Money, to super-ripped football player-types, there's lots of great guys here.

Taking a long look at the Advanced Search page, it becomes clear Gay Hoopla wants you to expand your horizons. From Abs, Ass-play, Baseball, Biceps, Costumes, and Country Boys to Squats, Treasure Trails, Uncut dicks, and Wrestling, there's all kinds of scenarios here, some softer than others, some harder. Most recently-added non-webcam updates deliver 720p HD movies that look quite good.

A thriving archive of live webcam shows fill much of the Gay Hoopla servers. Mostly "cumshows" that follow a model as he masturbates to completion, there's also plenty of posing, showering, conversation, and performer-fan interaction. New live shows are scheduled for daily 7pm broadcasts and are are one of the most fascinating parts of Gay Hoopla.

Cons:
You could almost view Gay Hoopla as an all-male live webcam site with some supplementary hardcore content thrown in as a bonus, that's how dominant the live stuff seems these days. Webcam shows also require additional payment to fully enjoy. Otherwise you're left a totally passive participant in a very active show.

Downloading videos isn't exactly a highly-customizable experience at Gay Hoopla, where members are usually given just one format and quality standard to download. A single DL link with no menu attached gives you no choice in the matter, nor does it tell you the file or frame size of the video in question. Live cam feeds are generally not HD, peaking at 450p and not 720p, nor are archived shows.

A good range of advanced search options help members roam the halls of Gay Hoopla without getting too lost or lonely. Disorientation, though, is a little too common: new updates are laid out in a bland display that doesn't make it easy to quickly sort the main hardcore features from the solo sessions and archived live shows.

Hot Guys Fuck is another gay-aimed site from the makers of Gay Hoopla, and one that would make a fantastic bonus for Gay Hoopla's members. The hetero hardcore of Hot Guys Fuck is shot for a gay male (or straight female) audience and spends most of its screen time ogling the hunky guys as they pound pussy, perhaps for the very first time.