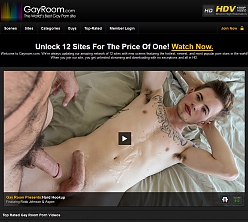 Overview:
All the LGBTQ community has ever really wanted, if I may, is a little place to gather support each other. Somewhere there's no threat of violence or discrimination or ridicule of those who simply prefer other men to women. At the plentiful and very exciting Gay Room network, online now for six years, homo hardcore fans find a dozen exclusive sites devoted entirely to the act of man-on-man sex. Presenting its original works in 1080p High Definition videos and promising to feature "the hottest, newest, and most popular porn stars in the world," Gay Room's unlimited streaming and downloading will provide you with more than enough cock-sucking colts and butt-licking bros getting freaky to keep your own cock hard, your eyes peeled open, and your jaw dangling a few inches lower than usual. Niche sites cater to fans of sensual massages, giant throbbing dicks, public fucking, illicit office hookups, dominant daddies and inexperienced twinks, and even some GoPro-equipped head-mounted POV porno that thrusts you into the sordid action. With so few serious competitors of equal quality and style, Gay Rooms sails ahead of the pack and is only really threatened by the very, very best in gay hardcore. If that's what you're after, and if you've got $29.95 to spare, Gay Room has the elixir of lust that you require.

Cons:
Giant banner ads appear at the top of the Gay Room homepage every time you log-on, as does a strip of smaller but no less distracting ads at the page bottom. Strangely enough, many of these ads are pushing you to join… Gay Room? That's not exactly the most effective use of webspace, is it?

Unlike its hetero counterparts over at Passion HD & Co., Gay Room is fairly quiet inside with very few members ever bothering to comment or criticize a scene. There's really no community to speak of here and the blank model profiles aren't exactly encouraging further discussion or communication. Even simple Twitter feeds from the more popular studs would be a handy addition.

Navigation tools need some work at Gay Room. The twelve available sites can be browsed individually or as an amalgamated network, but there's no keyword tagging system in place to help you find, say, an outdoor rimjob/blowjob/facial. Scenes aren't given synopses or more than a couple of preview pics, which isn't very helpful.

Not all Gay Room sites manage regular updates. In fact, a few of them no longer add new content at all. Out Him last added a fresh dose of hardcore boy-banging in 2014, Boys Destroyed and Bathhouse Bait in 2013, and Office Cock and Gay Violations way back in 2012. It'd be great to see these sites revived or at least supplemented with new concepts.