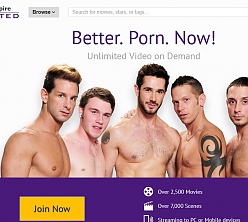 The Roman, Russian, Mongol, and British Empires came and went, overturned by their subjects and their nations, but there's at least one empire that remains to this day influential throughout the world, although in a largely different way than humanity's greatest imperial forces. It's Gay DVD Empire Unlimited, a streaming video site gathering the best hardcore gay, bisexual, and transsexual porn from across the planet in one tidy place. Holding everything from pseudo-romantic encounters in wooded forests to basement-set gangbangs far rougher than anything you've likely experienced, Gay DVD Empire Unlimited aims to bring you unlimited fellas, fellato, and fucking.

With an enormous collection of nearly 3,000 DVDs spawning more than 10,000 individual scenes, Gay DVD Empire Unlimited has a wealth of material, gay, bisexual and transsexual, for you to enjoy at your leisure. And, thanks to the detailed category listing and keyword tags, your desired form of adult entertainment, is just around the corner.

Cons:
Gay DVD Empire's pay-per-view sub-site remains the only way to access the site's full roster of licensed movies. Holding almost twice what the Unlimited section offers, it's hard to resist the lure of these titles, high-priced one-time viewing costs and all. It'd be great to see the same collection offered in both payment methods.

Licensing its hosted titles from a wide variety of producers and studios as it does, Gay DVD Empire Unlimited does not hold any content that could be considered exclusive. You may find these titles on other video archive sites or on the sites of their respective production houses.

Nothing hosted by Gay DVD Empire, either in its Unlimited or pay-per-view forms, can be downloaded free of charge. With no downloads at all for Unlimited members, anyone wanting to save a copy of their favorite flick on their hard drive will first have to pay a fee (often with a viewing license attached) before hitting the download button.

Depending on the source of the video in question, the image quality of something seen on Gay DVD Empire Unlimited can range from stellar (read: actual HD) to totally shithouse. Lower-end studios churn out crappy low-res videos and hawk them at low cost; the same could be said of the "vintage" (read: decades old) titles available here and their lackluster imagery.