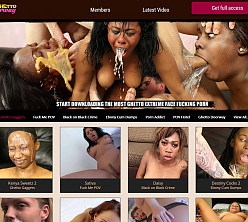 On Ghetto Doorway's most active sites you'll find High Definition videos that bring a truly insane level of detail to your screen. Watching a Ghetto Gaggers scene in the provided 1080p and 720p HD MP4 downloads provides great detail and clarity, and even a solid soundtrack of choking, gagging, sputtering, gasping ebony babes having their faces messily filled.

Ghetto Doorway is no spring chicken. In fact, having been online now for over five years, this network now holds a fairly strong archive of 732 scenes and around 605 photo galleries. Discounted by Mr. Pink's to just $19.95-a-month, a Ghetto Doorway membership makes a lot more sense at this price.

Cons:
Every project undertaken by the Ghetto Doorway crew (on this and other networks) is poorly designed, uncomfortably laid-out, and not exactly attractive to the eye. Navigation is a major issue with no model index or network-wide update listing available.