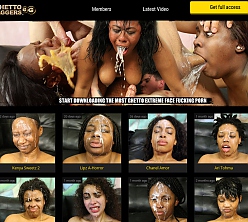 Cons:
Ghetto Gaggers may now be seeing a new episode arrive roughly once-a-week, but it doesn't exactly have a history of consistent, reliable updating. On the Ghetto Doorway network provided to all members, the majority of sites no longer add new content.

The women degrading themselves by shooting for Ghetto Gaggers aren't exactly given a warm welcome, not even once off the set and on the website. No model index page leaves you with no choice but to search manually or browse updates chronologically. With many repeat visitors, a model index would ease browsing issues big time.