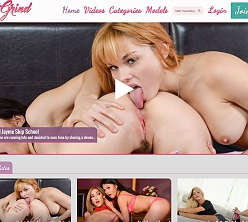 Pros:
Some women are aggressive lovers with powerful desires. Others are more inclined to follow their lover's lead, servicing her sexually and psychically, following each instruction. Girl Grind features both kinds of performers - Gabriella Paltrova, Romi Rain, Abigail Mac, Abella Danger in the former camp, Jayme Langford, Sydney Cole, and April O'Neil in the latter.

A fairly small site showing ample promise and potential, Girl Grind could stand to provide its members with some basic bonus content. Whether access to a related site or a third-party lesbian hardcore video feed, some kind of extra thanks for your patronage would be very much appreciated. Girl Grind can run dry for heavy-duty viewers.

Photo galleries offer strong views in fairly strong resolutions, but no downloadable sets (zipped or otherwise contained) are available. To save a full set of Girl Grind images you're left with no choice but to download each image of the roughly individually, not something most folks would be inclined to do.