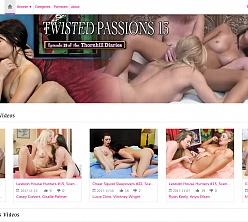 Overview:
When your wife tells you she’s going out or hanging out with her girlfriends, it’s probably about as innocent and platonic as you could possibly imagine. When the lusty, morally loose women of Girlfriends Films get together, however, it’s an entirely different story. Dedicated to producing the highest quality all-female hardcore entertainment on the market, Girlfriends Films has already brought viewers a ton of stunning sapphic viewing. In such lustily titled film series as Imperfect Angels, 19th Birthday, Twisted Passions, and (uhh) Lesbian Legal, Girlfriends Films subscribers enjoy watching the likes of Anya Olsen, Remi Rain, Blair Williams, August Ames, and India Summer show off their seasoned skills with the female form or, alternatively, brave their very first femme-on-femme exchange, letting an older, more experienced woman show them the ropes. Boasting High Definition videos as crisp and colorful as its models are foxy and eager for beaver, Girlfriends Films is a damn fine way to spend $29.95-a-month and get all the lusty lesbian hardcore you can demand in return.

Bringing its members a parade of all-female hardcore sexuality in beautifully clear 1080p High Definition video streams and downloads, Girlfriends Films hosts both continuing and short-run series, as well as more casual encounters, all of the most recent episodes expertly capturing the chemistry-rich couples and steamy group scenes.

A few select lesbian sites have already ventured into 4K territory to excellent results and maybe, just maybe it’s now time for Girlfriends Films to do the same. With the increased detail Ultra-HD resolutions provide, Girlfriends could seriously capitalize on the awesome array of models of all ages at its disposal, sending pristine shots of their stunning selves into members’ homes and spank banks.

The further back into Girlfriends Films rather storied past you dig, the more likely it is you’ll turn up some movies and scenes that are less than impressive. Though the older content has its charms - and its fair share of early-00s stars - it’s only in the last five or six years that Girlfriends Films has really hit its stride.

Lacking any kind of photo galleries, Girlfriends Films is strictly video-only. If you’re devoted to ogling luscious ladies as they strip, pose, and enjoy each others’ flavors in still form, you’re left here with nothing to scratch that particular itch. Given the cast, the concept, and the people in charge of crafting the Girlfriends Films look, you’d expect photo galleries loaded with excellent shots, too. Bummer.