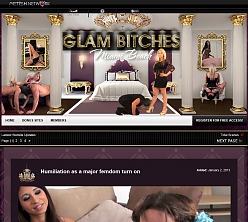 It takes a strong woman to suppress the sexual inclinations of a man and his erection, but if anyone can do it it's the Glam Bitches. Gussied up in latex catsuits, leather dresses, and the highest, skinniest heels available, these dominating vixens trample over the men who so desperately seek their approval, crushing their balls and bruising their egos all the way. Comfortably at home on Fetish Network, Glam Bitches aims to make the best of its uniquely abusive content, but it hasn't yet reached a satisfactory size, leaving fans wanting more, more, more.

Overview:
We've all had encounters with women who can rightfully be regarded as "high maintenance" but Glam Bitches take the top prize in that rather unflattering category. Fond of meeting feeble-minded men and dominating them physically, mentally, and emotionally, the titular dommes of Glam Bitches strap on stiletto heels, slip into skintight black dresses, and straddle the faces of their pathetic male subjects, force them to suck their mistresses toes, and do pretty much anything they can think of to keep the sex-starved slaves in full subjugation mode. Costing members $39.95 a month to access, the Miami-set Glam Bitches aims to rid you, dear reader, of any feelings of superiority you might harbor over the female of the species. Here at Glam Bitches, being precocious, arrogant, self-righteous, or a plain old upstart is definitely ill-advised. Part of the Fetish Network of sites, Glam Bitches is well connected and has a stable base of operations, but does it impress on its own or does it rely too heavily on the company it keeps? I'm heading inside (with protective armor for safety reasons) to find out the truth directly from the mouths of bitches.

Every Wednesday sees a new scene added to Glam Bitches' archive and while there's not exactly a whole load of content online here yet, if these updates keep on such a schedule, there soon will be. Each update brings both video and picture content, the former offering streams and downloads while the latter provides screencaps for previewing and archiving purposes.

Cons:
Glam Bitches might be updating once a week, but there's so little content on here that it'll be many, many months before the site is sufficient on its own. The good news, though, is that Fetish Network hosts many sites of a similar nature and premise, sites you'll no doubt end up enjoying on the side.

Some of Glam Bitches' videos are offered in High Definition formats of 1280x720 pixel resolutions. Unfortunately, though, the scenes appear to have been upconverted from lower resolutions, resulting in a hazy image and some digital artifacts crowding the frame. In fact, there's only one truly HD site on Fetish Network, Missogyny, and unfortunately it features women dominating other women, with nary a ball-buster in sight.

Image galleries might be labelled as containing "Photos" on the outside, but inside it's a different story. Containing nothing but screencaps taken from the accompanying video, there's nothing particularly interesting inside these galleries; nothing you haven't seen before, at least.

Glam Bitches has a distinctly late-nineties, early-naughties style. Clothing, hair, furniture, and architecture all seem to be at least ten years old, if not older, and give the impression (accurate or not) that this material has been sitting in a hard drive on a shelf for years.

Conclusion:
The women of Glam Bitches might not take any shit from their subservient male victims, but they'd do well to heed the advice of their webmasters, fans, and critics. Without an increased update schedule, it'll be many months before Glam Bitches holds enough content to keep the modern porn viewer interested. Network access is included in membership, but even the 41 additional sites can't really make the required $39.95 all that easy to part with. HD videos are online here at Glam Bitches, but they're unfortunately disappointing and appear to be upconversion jobs from many years ago. Glam Bitches' content might be somewhat appealing, but the real Fetish Network gold lies elsewhere and is more worthy of your money and attention than Glam Bitches, at least at this point.