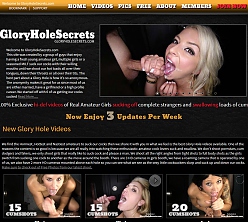 Littering the countryside like abandoned Circuit City stores, glory holes welcome those in search of a truly anonymous sexual experience. Looking for an anonymous and discreet suck job? Afraid your politician husband will object to you openly blowing thirty or forty guys a night? Well, thank the load for inspiring sites like Glory Hole Secrets, where you'll marvel at the level to which some women will stoop just to get a taste of eighteen or nineteen different wads. With High Definition videos capturing every sordid detail and DNA-containing drop, Glory Hole Secrets is sexy, sordid, scandalous fun.

Overview:
Odds are pretty strong that your town holds a few sordid sexual secrets, and not the kind involving politicians and prostitutes either. People have been enjoying public sexual activity since the dawn of man, but over the years it has been pushed from the campfire to the seedy motel, Wendy's parking lot, or run-down movie theatre; basically anywhere hidden from families and tourists. Deep in the bowels of many adult stores, porno viewing booths, and public lavatories of all kinds, you'll find the glory hole. An opening in a door or wall just large enough to shove a penis through, the glory hole has led to more anonymous sexual encounters than all the margaritas and mai tais in the world, allowing those in need on oral pleasure the chance to fill the mouth of an open (and hopefully female) mouth without ever having to exchange words, buy dinner, or mind your manners. Glory Hole Secrets presents an exclusive collection of adult videos starring not professional slurpers 'n' jerkers but total amateurs with no reason to do porn save their love of sucking dick and swallowing seed. These women, who range in age from young and not-so-young, and in experience from none to thousands of hours at the end of a dick, simply wander into whatever dingy hole holds today's sperm-providers, is asked a few questions by the Glory Hole Secrets director, then drops to her knees and starts working a line of guys into an explosive frenzy one-by-one, swallowing (or otherwise enjoying) each load they toss her way. A Glory Hole Secrets membership will set you back $29.95, but that's a ridiculously small price to pay for ensuring you don't miss out on the fastest-growing pornographic trend since the insatiable Asa Akira beat everyone to double-anal.

Pros:
Each Glory Hole Secrets episode sees an amateur slut take command of a line of anonymous penises, stroking and sucking (and sometimes fucking) each one until it dumps its load all over her face or fills up her waiting mouth. Moving quickly from one load to the next, the scenes are non-stop gauntlets of oral servicing.

Although definitely productions with an amateur bent, Glory Hole Secrets captures each multi-cock encounter in a plain but effective fashion. An objective camera grabs every slurp and stroke and gulping swallow in High Definition resolutions of 720p and 1080p, streaming and downloadable, while a second video shows things from above. (Hello, Cleveland!)

Cons:
From the moment you set virtual foot in Glory Hole Secrets, you'll no doubt notice that it looks like a relic from the 1990s. Dude, that's last century! It's clear Glory Hole Secrets needs a makeover, but it looks increasingly unlikely to ever happen. Still, at least it looks better than some other glory hole sites…

There are no true photo galleries here, only screenshots pulled from the very same videos they accompany. There's also duplication amongst the videos with most girls featured in their standard scene, a screenshot gallery, and a POV video shot from above, each given its own spot on the update schedule. (POV videos? Aren't glory holes supposed to prevent each party from seeing one another?)

Glory Hole Secret recently added a scene starring a woman who also appears in one of the site's earliest efforts. Strangely, though, the content is very, very similar, almost identical. Are early productions being recycled and passed off as new or is Glory Hole Secrets just not very good at keeping organized.

Conclusion:
Glory Hole Secrets has been doing quite well for itself for some time now, but it's reign over lesser glory hole sites could be coming to an end. In desperate need of a redesign, this is one unattractive site and it's also, I'm sorry to say, filled with many less-than-gorgeous women that will definitely disappoint some more demanding viewers. The cock-sucking parades presented here in 720p and 1080p HD videos offer simple views of the invited cum-guzzlers as they suck off and swallow the loads of ten, twelve, fifteen, even twenty men in a single sitting! This thrilling degeneracy makes for great viewing, but it can also become a bit stale after a few installments. With models usually shooting a few scenes (or having their work chopped into smaller scenes), there's too much repetition here. Those that can stand the frequently similar updates and somewhat mangy chicks, however, would do well to gloss over such superficialities and stick to watching some of the filthiest glory hole porn on the 'net.