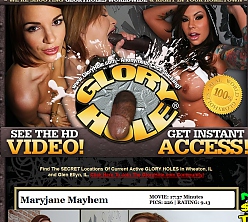 Overview:
Anonymous sex has been floated as an approach to social immersion since Athenian times but something tells me gloryholes weren't part of the architecture back then. Today, however (and this is according to legend and rumor) gloryholes are littered across the USA in gas stations and campground toilets, in run-down department store fitting rooms and adult video emporiums, allowing women and men to stop by, drop to their knees, and orally, vaginally, or anally slobber and slide on whatever dick is presented to them - it doesn't get more anonymous than that! Gloryhole, a site on the Dogfart network, takes you deep into the bowels of various adult stores and follows cock-starved women as they push their sluttiness to new heights. Shot in High Definition and captured in HD videos and high-res photo galleries, Gloryhole gives its members a fascinating look at just how far gone many black cock addicts are, risking disease, bruises, and scabbed knees just to drain the balls of the thickest, blackest dicks in town while never knowing if it's the local cop, school teacher, or parish priest they're sucking down. Gloryhole membership runs $29.95-a-month but, like all Dogfart sites, includes network access to more than twenty sites and all the Gloryhole-aided interracial sucking, fucking, and cum-dumping you could ever want.

All Gloryhole members are given access not only to this site's exclusive archive but to that of every other Dogfart site, too, 23 of them in total. From Black On Blondes to Watching My Mom Go Black to We Fuck Black Girls to gay hardcore site Blacks On Boys, there's a great range to Dogfart's interracial debauchery.

Cons:
Unlike many Dogfart sites, Gloryhole doesn't update every week, only every other week. This wouldn't be a huge concern except that a handful of other Dogfart sites no are longer active and haven't updated with new content in years. Let's just hope Gloryhole isn't headed in the same direction.

The dialog heard in Gloryhole scenes can be pretty ridiculous. "Oh, I'm an innocent white girl in a strange and scary part of town. I wonder what's inside the back room of this seedy adult store. Oh my! An African American penis… and it looks so tasty… I hope my racist father doesn't find out I sucked this giant black mamba snake." Need I go on?

The site design employed by Dogfart could use some sprucing up. Not only is Gloryhole's layout visually bland, it could also provide stronger navigational tools that aren't tucked away in inconspicuous drop-down menus. Thankfully the gloryholes themselves look appropriately filthy.