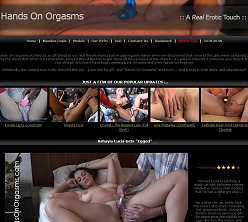 You love pussy, right? And you consider yourself an expert in the fine art of pussy manipulation, I'm sure, but you certainly aren't going around filming yourself bringing women to orgasm with nothing but your hands and an appropriately-sized "marital aid". That's exactly what you'll find at Hands On Orgasms, though: a guy's hands working their magic on the clits, labia, and vulva of British women eager for sexual relief. It's a unique concept, yes, but Hands On Orgasms doesn't quite make the most of its intriguing setup and likely leaves members wishing those man hands would bugger off and let the girls take over.

Pros:
The women featured in Hands On Orgasms scenes are amateur British girls of varying ages, looks, shapes, and sizes. They're all here with a common purpose, though: to let a stranger's hands help them reach mind-blowing orgasms. I don't recall ever having seen another site dealing in this kind of unique content. Color me surprised!

There's a surprising amount of variety at Hands On Orgasms, with witch and bumblebee costumes coming into play, and even some orgasm denial scenes that see the vibe-wielding guy pull his hands away just as the girl is about to climax. Sometimes he dives back in and delivers an explosive final blow; sometimes he leaves her hanging until next time.

Videos are offered in multiple formats and can be either streamed or downloaded to your hard drive. Resolutions peak at 1280x720 pixels, High Definition, and generally offer good clarity in medium shots showing the women's full bodies and faces.

Bonus access to British Gals, a photo-only site, is included in your Hands On Orgasms membership package, but video fans should be thrilled enough with the 254 exclusive scenes online here. Updates keep the site growing and arrive every three days.

Cons:
Where most sites would group their video and photo content together, Hands On Orgasms and its sister site, British Gals, do no such thing. Photo galleries corresponding to Hands On's scenes are held on another site and this makes it tedious and unnecessarily time consuming to enjoy both videos and photos. If the webmasters are going to insist on having these two separate sites, there should at least be fluid navigation between them.

Although they do reach 720p HD resolutions, the videos seen here are quite bland and lack any real vibrancy. Seemingly shot in cheap motels and poorly lit bedrooms, the girls aren't exactly flattered by the lighting or the framing. There's definitely a lot of room for improvement, visually speaking.

Many updates fail to deliver one complete scene and these are instead split over multiple installments. You've got scene titles repeated with only a "001" or "002" to tell you whether you're watching a beginning, a middle, or an end, and a video archive that seems much larger, and its updates more frequent than they really are.

Occasionally, the model won't seem to into the scenes and you get the sense she'd prefer to be applying pressure to her clit herself. This can make the scenes a little uncomfortable to watch, even more so than they already are. Do you really wanna be staring at some guy's hands when you could watch a woman do wonders with her own?

Conclusion:
Hands On Orgasms is definitely one of the more unique sites to cross my virtual desk of late. With an exclusive collection of one-sided pseudo-mutual masturbation scenes that see one lucky guy applying precision manipulation to the pussies of a hundred-or-so women, there's something quite interesting going on here, something that pussy worshippers in particular will enjoy. Unfortunately, from the segmented scene updates to the off-site photos and the rather dull and pale videos, HD resolutions or no, Hands On Orgasms certainly has some troublesome areas in need of revision. Forcing members to visit another site, even one freely accessible to them, in order to see the photo galleries matching these scenes is a cheap move on the part of the webmasters. Unique or not, Hands On Orgasms isn't as fun as its sister site The Female Orgasm (which you don't have bonus access to) and fails to really capitalize on its ample promise.