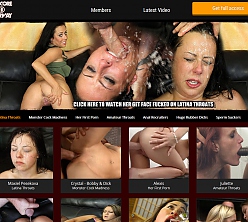 Cons:
Hardcore Doorway's ten websites have weathered some rough seas but now only two of them continue to update with any regularity. Sperm Suckers and Latina Throats remain active, but not hugely so, adding only one scene every month or two. All other sites have dropped into inactivity and are no longer producing new work.

There may be some very talented, insanely resilient, and definitely sexy women appearing across Hardcore Doorway's ten websites, but without a model roster or index page, it's far too hard to find their other online work, aliases they may have used, or social media info to keep you connected. All you get here is a name, some photos, and the video.