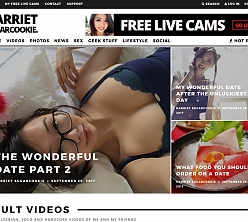 Pros:
One of the most original and creative adult sites we’ve encountered at Mr. Pink’s, Harriet Sugarcookie is both the woman in charge, the main point of focus, and the site itself. Hell, at this point, Harriet Sugarcookie is a culture! Home to a wealth of non-porn content - reviews, articles, advice columns, blogs, interviews etc - as well as Harriet’s own softcore and hardcore content, and that featuring her long parade of guests.

New content of one form or another hits Harriet Sugarcookie’s homage every day with sexually explicit content landing about once or twice a week, more if you include the photos in that department. There’s a solid collection here, too, as stated earlier. The non-sex archive is also huge and covers all kinds of pop-culture obsessed ground as well as sex toy reviews, advice columns, and the like.

Most video download links refer to zipped MP4 files that must, of course, be unzipped before viewing. This means you can’t check a download halfway through, nor set it to autoplay upon finishing. Not only that but many video download links appear to be currently nonfunctional. Thankfully streams are working fine and provide many viewing pleasures, but missing downloads are a problem.

The other obvious problem with the videos is the frequent issue of interlacing. This is especially visible in streams for some reason, but it mars the otherwise strong semi-pro feel of Sugarcookie’s productions. The handmade yet smooth feel of the sex scenes helps make them stand above other amateur efforts and it’s a shame that’s somewhat negated by shoddy encoding jobs.

Harriet’s personality used to shine through both her non-sex and her sex updates about equally but now it’s more heavily leaning toward the less graphic and explicit content. Branding herself a lifestyle and sexuality guru might lead our hostess to new career highs but it may also leave her most devoted admirers to keep rewatching her older smuttier content.

Conclusion:
There’s little doubt that Harriet Sugarcookie is one of contemporary porn’s breakout self-made stars. Initially starting out as a webcam model and occasional custom video creator, Ms. Sugarcookie now presents herself as a pop-culture writer, advice giver, product reviewer, erotica blogger, and sexy model whose escapades are just as likely to include stuffing her face with kimchi tacos and straddling the mouth of a foxy European dame while recovering from a big night out in Budapest. The personality on display here is imbued into all parts of Harriet’s site, so much so that even her diminishing sexual contributions don’t take away from the overall style and feel. Missing video download links, many interlaced streams, and a lack of zipped galleries all hamper your viewing pleasures, but really quite minimally if you’re a streamer not too concerned with non-nude photos, more eager to see what Harriet’s smoking hot new Japanese friend, Katana, can bring to the fold. As Harriet expands her empire, don’t you want to be able to say you knew (and furiously beat your meat to) her way back when?