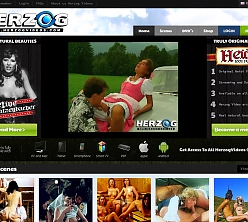 Adding some 200 scenes since last Mr. Pink's ran a review, Herzog Videos is growing steadily thanks to updates that arrive three times each week. As part of the Stiffia network, those subscribing to Herzog, perhaps at the discounted rate of $14.95-a-month, also unlock one more Stiffia site for each month they stick around.

Cons:
Shot with German dialog, Herzog Videos' movies won't be understood by anyone who can't speak the language. There are no English subtitles, an especially disappointing move since Stiffia seems to be aiming for an English-speaking audience. It is, however, pretty amusing to not only hear guys announce their impending ejaculation in German but in forceful, stagey German.

Obviously not exclusive, the entire Herzog archive has been released in home video formats and most likely digital formats before. You won't find this content littering the 'net or anything, but it is out there and won't just be found here.

Conclusion:
Heidi porn probably isn't the best descriptor for Herzog Videos' increasingly varied digital output. With recent updates proving more conventional and less outdoorsy than earlier installments, it seems Herzog has run out of alpine copulation and now draws from its catalog of BDSM-tinged hardcore of a more conventional (and indoor) nature. Hey, that's cool, though. Herzog could use a little variety… but it could also use some subtitles to help out non-German speaking audiences, a video remastering program to help its videos look as clean and vibrant as possible, and better translation of its often unintelligible text synopses. The movies are often strange and humorous - a gaggle of men being jerked to completion by women they've been fucking as a folk band plays in the corner and a barmaid pours the mountaineers fresh post-orgasm beers - but they can also be bland and far too ridiculous to be sexy. Whether or not Herzog's for you depends largely on, well, you.