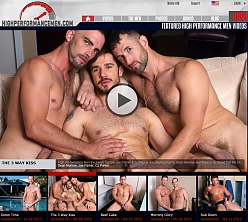 Just like the fastest cars in the world demand the wildest, most daring drivers so too does A-grade gay hardcore need the most adventurous men. Well, it has them here at High Performance Men, a site that, although very new and very small, is already showing a huge amount of promise. Although it holds a very simple premise - hot-as-fuck guys giving their all in stroking, sucking, and fucking scenes - content is delivered beautifully and keeps you wanting more. Don't jump the gun, though, as the site won't be for everyone. To find out if it's, you know, you or not, check out Mr. Pink's first review of High Performance Men. I hope the first of many.

Overview:
When on the prowl for a guy who'll really put the "fucking" in "ass-fucking", you might end up having to discard a number of men who just don't meet what you assumed were your quite simple demands. Too many guys are erring on the side of femininity and letting their looks speak for themselves. What you want… No, what you need is a guy who isn't high maintenance, but high performance. Yes, like a car. Just like a car that goes from zero to sound barrier in, like, four drinks. Confused? Don't be, 'cause High Performance Men is here to straighten you out… as it were. With beefcakes, hunks, and an assortment of hard-fuckin', deep-dickin' homos on board to show all the sissy boys how it's really done, High Performance Men is a gay hardcore site that doesn't fuck around, figuratively speaking. Whether they're gay, straight, or bi, the High Performance Men are here to fuck your brains out via the miracle of Internet pornography and, make no mistake, this is a hardcore site through and through. Promising its members scenes showing the hottest masculine men on the planet stroking their dicks, blowing each other, plugging assholes, and just generally engaging in high-impact, no holds (or holes) barred sex, High Performance Men seems to offer a solid service for the $29.95 it charges for monthly membership. Gay hardcore is a porn niche that's filled with unfulfilling banality, but this one, folks, this one seems too legit to quit… fuckin' your brains out even after it's exploded on your ass. Now that's high performance, indeed!

Pros:
Recruiting the most impressive performers in the gay hardcore arena, High Performance Men has ensured its member have only the hottest, hunkiest, and hardest fucking guys in the biz. Chad Glenn and Christopher Daniels are here, as are CJ Parker, Dean Monroe, Girth Brooks, and Joe Parker. For those of you who like their men inked and pierced, you've got the imposing Drake Jaden on board, too.

Updates are arriving at High Performance Men on a weekly basis, which is great to see, especially on a site as young as this one. A bonus network is accessible to all members and gives you access to a whole shit-load of extra content from Austin Wilde, Marcus Mojo, Rod Daily, Samuel O'Toole, and Trystan Bull. You'll love it!

Cons:
Currently holding just 19 videos and 27 galleries, there isn't a whole lot to High Performance Men. The network access ensures you're never left wanting for content, but it'd be much more satisfying to have that content come from this site and not another.

I know I just praised the wazoo outta the networked bonus content, but here's a complain, albeit a minor one: the updates from said bonus sites clutter up the main High Performance Men page and really should be placed in a less obstructive location… like the Bonus page.

Conclusion:
Off to a racing start is High Performance Men, a small, new site that hasn't had the chance to grow. It's a real bummer there's only 19 scenes online at this point, as what is here is definitely some of the most professionally produced and consistently enjoyable gay hardcore I've had the privilege to review in a while. The free network access to seven additional sites eases the feeling of emptiness such a small collection a site thrusts on its members, but it can't fill the void entirely, just make it more palatable. The content looks amazing, with gorgeous 720p and 1080p HD videos and fantastically detailed and inviting photos, delivered in high-res frames. It'll be a while before High Performance Men catches up to other, similar sites two, three, four times its size, but it's still gonna be on hell of a fun ride getting there, trust me!