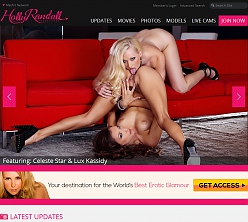 Streaming and available to download in 720p and 1080p HD resolutions, and usually accompanied by impressive 4480px photo galleries, Holly Randall’s site delivers powerful visuals in a good range of formats and resolutions. It’ll be awesome to see Randall’s work in brilliant 4K but that upgrade hasn’t yet arrived.

A new Randall production lands on her official site every twice weekly, one update bringing photos and the other holding videos. There’s a solid collection of HD carnality already online here, but these updates push the 600-plus scene archive into even more comprehensive and satisfying territory. Discounted to $19.99 for a limited time, monthly membership is also a great deal.

Eagled eye viewers may find it a little odd that Sunny Leone, a star performer long since retired from a active booty duty, appears among the list of most recent updates. Dated 2018, this is evidence of content recycling. Thankfully, much of Randall’s older work still has plenty of appeal. Unfortunately, it seems minimal to zero remastering has been done to this older material.