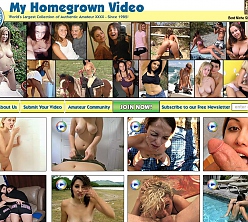 We all love pornography; otherwise we wouldn't be here. Once in a while, though, you've gotta give the professionals a rest and let the up-and-cummers, the amateurs, the homemade supersluts have a chance to shine. At Homegrown Video, these eager amateurs are given every chance to step into the spotlight and wow a captive and devoted audience with their sexual adventures. Homegrown Video has been in operation since 1982 and online since 1997. In that time it has seen good years and not-so-good years, but lately things have been looking slightly more professional around here. Waitasecond... professional? This is an amateur site, what does professionalism have to do with anything? Egads, dear readers. Has the bastion of homemade smut finally sold out to The Man™ or is it still holding true to its original intentions, to provide producers and viewers of genuine, authentic homemade hardcore porn a place to share, discuss, and enjoy each others work? Homegrown Video, consider yourself under Pinkvestigation!

Overview:
Way back during the height of the Haight-Ashbury hippie era, back when Janis, Jimi, and Jerry were wailing on their respective instruments before crowds of LSD-chomping, reefer-passing society dropouts, plans were being hatched for a dedicated community of free-lovers who would share footage and pictures of themselves enjoying their sex lives in a most intimate and explicit way. Eventually evolving into what is today known as Homegrown Video, this group became a company and went into business offering the curious and the exhibitionists of the world the chance to both watch and share via the World Wide Web. Now in its fifteenth year of operation, Homegrown Video has become one of the 'net's largest databases of DIY pornography, gathering people from all walks of life and from all areas of the world in the name of free sexual expression. Seemingly devoted to the DIY aesthetic to an even greater to degree than Southern California punk legends and originators of the "Econo" mode of doing it yourself, the legendary Minutemen. Now, I know there have been some changes made 'round these parts of late and I intend to find out whether or not they're changes for the better, improving Homegrown Video with each new element, or an increasingly detrimental force that negates much of the hard work and diligent adherence to the DIY ethos that has made Homegrown Video an American pornographic institution.

The tide of recent improvements and upgrades made to Homegrown Video have again found members talking about how great it is to be here. Photo galleries are now added every single day, and videos more often than previously; videos offer more download and streaming options; there's even an Extra Feeds directory that gives you access to more than 54,000 hardcore sex scenes at no additional cost.

It usually costs you $29.95 for a monthly pass to all things Homegrown Video, but Mr. Pink's can now announce a deal that'll get you inside for significantly less. How much less? Ten whole US dollars! For just $19.95 a month, you too can enjoy the seemingly endless supply of amateur sexual theatrics Homegrown Video is known for.

The visual quality of Homegrown Video's offerings is generally quite poor. That might be expected when you're dealing with genuinely amateur pornography, but with the advent and proliferation of High Definition video cameras, you'd think that would have changed by now. Of particular concern is the wave of, quite frankly, pretty horrible looking photo galleries hitting the main Pictures page of late. Clearly culled from video transfers of old 8mm and 16mm sex flicks, these images look quite terrible.

Homegrown Video's layout, design, and construction are, quite frankly, excessively amateurish. It's hard to inspire confidence and adulation in your customers when they're staring slack-jawed at a website that looks like it hasn't really changed in the (presumed) decades since it was first cobbled together from borrowed HTML code. This is a clumsy and extremely cluttered website.

Conclusion:
When dealing in homemade hardcore pornography, quality is always going to be a major concern, and one that isn't easily dissipated. Homegrown Video has long managed to make the most of its technically unremarkable (and often unattractive) content archive because of its DIY sources. Unfortunately, the longer Homegrown Video stays online, the more packed with noticeably professional women in noticeably professional adult productions it seems to become. From the webcams to the bonus hardcore feeds, and even deep into the main content archives themselves, the appearance of women like Aimee Addison is cause for concern. Homegrown Video's own photo and video content doesn't really seem to be improving, and, in some cases, looks to be devolving to a less appealing technical state; why this continues to happen while the rest of the site simply becomes more cluttered with silicone-augmented racks, botoxed lips, and that "I'm getting paid to fuck, not to enjoy it," look you often see on the faces of pornstars mid-performance is something this reviewer can't quite figure out. It's an age-old adage and something of a cliche, sure, but "quality over quantity" seems entirely appropriate in this circumstance. Perhaps it's time for Homegrown Video to be relaunched with a more concerted focus on the best of this organizations enormous catalog of genuinely amateur content, perhaps even remastered for modern viewing demands. As it stands now, Homegrown Video seems a little bit lost at sea.