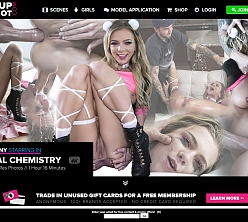 Hookup Hotshot may not have the tightest update schedule but damn if it don’t deliver the goods on a regular (enough) basis! Integrated into the main archive, members will also find more than 30 BTS scenes offering on-set insight and exclusive access to porn’s most daring new performers. Hookup Hotshot is now even more tempting than before.

Cons:
Although not strictly a cosplay site, Hookup Hotshot does doll its models up in cartoonishly colorful outfits, makeup, and hair styles. To some, they’ll look like real-life versions of the punk-as-fuck version of DC Comics’ Harley Quinn. To others, they’ll look like clowns plastered with face paint putting on a ridiculous show.

Hookup Hotshot won’t be to everyone’s liking and will be far too aggressive and demeaning for many viewers. Girls are not only treated like pieces of raw meat but they even sometimes wear clothing designating them as such. Name calling and verbal degradation is a common theme and eagle-eyed viewers will even spot some urine play, which is most definitely an acquired taste.

Hookup Hotshot provides behind-the-scenes updates every now and then, though navigation tools aren’t particularly helpful in separating the hardcore updates from the BTS clips. In fact, navigation is almost nonexistent here. Exclusivity isn’t as clear as it could be, either, with BTS scenes labelled ‘Exclusive’ while mainline releases can be found at Evil Angel, among other online vendors.

Watching scenes there’s very little actual penetrative sex that lasts more than a minute or two before Gozzling stops to slap his partner in the face, spit in her mouth, throw her body to the floor, or smear whatever fluids are around into her face, hair, and even eyes. It’d be great to see a slight compromise between the more aggressive acts and the intercourse with more of the latter included each time around.