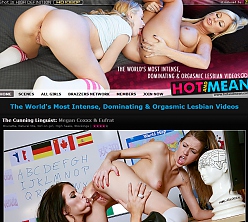 Lesbians: just like anyone else when backed into a corner or pushed into an impossible situation (eg: sexual dissatisfaction), they can turn nasty! Hot and Mean is a bold "all-girl" hardcore site that's really all-woman. Seducing attractive neighbors, friends, colleagues, and strangers into what could be their first same-sex experience, about half of Hot and Mean's models are domineering dames hell bent on getting what they want. And what they want, obviously, is pussy. If you enjoy watching two of porn's sexiest ladies tearing into each other with a vengeance, what you want, trust me, is Hot and Mean.