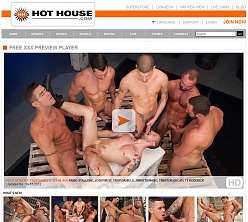 One of gay porn's most thrilling and acclaimed hardcore outfits, Hot House serves up tasty feature-length movies containing steamy sex scenes that pit man against man in an all-out battle for carnal fulfillment. Hosting everything from BDSM-flavored gangbangs to straightforward (and surprisingly intimate) and relatively vanilla sex, Hot House promises to fulfill your every pornographic need and desire with its stellar productions. But without downloads, how fulfilling can it be? Tag along with Mr. Pink, friends, at find out!

Overview:
Hot House is one of gay porn's preeminent studios, having released hundreds of titles over its nearly twenty year history, many of them some of the most acclaimed titles of their time, and here on its official website the company pulls back the curtains on its extensive archive for your online entertainment. Started in San Francisco in 1993 by director Steven Scarborough, Hot House most recently took home the 2012 XBIZ Award for Best Gay Site and from the looks of the previews proudly displayed on the tour pages, that's hardly a surprise. Crystal clear imagery showcases the incomparable physiques of some of porn's most admired, lusted after performers as they shoot fetishistic BDSM scenes, gang up on a young sub, wrestle each other into utter defeat, and even enjoy the simpler pleasures (sucking dick by the pool, pounding a tight ass on the sofa) that a life in porn affords them. Costing $29.95 a month, membership to Hot House guarantees satisfaction and promises the member access to a steady supply of the hottest all-male adult hardcore films on the market. Are you ready to discard your clothes, grab a towel, and sweat yourself silly? If so, it looks like Hot House is the place for you.

Variety, they say, is the spice of life and Hot House offers substantial variety in the hardcore realm. Simplistic one-on-one fucking in a bunch of different locations and environments sit side-by-side with elaborate productions focusing on gangbangs, assfucking trains, cruising, machine shop frollicks, and bears dominating twinks, among many other situations.

Photo galleries look quite good and provide viewers with 1920px frames that are clear, detailed, and show ample depth. Videos also look good in their streaming formats, generally reaching a 960x540 pixel High Definition resolution at their best. (There is the occasional 720p stream.)

A new scene is added to the already large Hot House archive once a week and each update contains both video and photo content. That means, dear reader, this impressively endowed site is only growing larger and increasing in value while you, as a Mr. Pink's reader, gets inside for just $14.95 - that's almost half-price!

Cons:
None of Hot House's scenes or movies can be downloaded. The site is staunchly devoted to its streaming-only viewing options and, although the 540p format is quite clear, even the best stream can't compete with a 720p or 1080p downloadable MP4.

Similarly, none of the photo galleries provide members with zip options, leaving them to save each individual picture that takes their fancy instead of quickly and conveniently grabbing a whole shoot in one tidy download.

The further back you dive into Hot House's archives, the higher the likelihood you'll come across a rather bland looking scene. Older content was not shot in HD and suffers for it, with washed out colors and a lack of image definition that makes even the 540p streams look like an Imax projection.

Conclusion:
True to its legendary reputation and status among gay hardcore fanatics, Hot House manages to make its official website a thrilling adventure from start to finish. Sure, the older scenes don't impress anywhere near as much as more recent endeavors, but with the company continually evolving, the more recent productions are always going to be better than those of months and years past. The lack of downloadable video content is the major disappointment here and it is very disappointing indeed. The streams look quite good, sometimes edging into brilliance, but it's nonetheless sad to know that you're not able to save any of them for later viewing. If downloads were added - to photo galleries, too, in zipped form - then Hot House would surely see an increase in its already strong reputation and, at least on my part, a slightly more glowing review than this already very favorable one. Come on, Hot House, you're so close to asshole-puckering perfection!