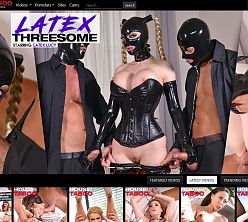 It takes a bold adult performer to commit to the more intense physical roles demanded by House of Taboo. That’s why a scan of the model roster will show you Cherry Kiss, Jasmine Jae, Sophie Anderson, Susy Gala, Angel Wicky, and, open-holed queen of the sluts, Veronica Avluv.

Having long championed HD video, DDF and House of Taboo are now pushing ahead with an Ultra-HD program that brings viewers stunning 4K views at 60 FPS. What’s more, House of Taboo hosts a handful of “double video releases,” pairings of VR scenes and 2D options. Clearly this is a site and studio that’s always aiming higher.

Just how much perversity can one site contain? Well, House of Taboo already holds more than 1250 scenes yet keeps adding more, between two and five scenes, each month. Diving headfirst into this den of depravity need not cost you a fortune, either. House of Taboo now offers first time subscribers their first month for only $14.95.

Cons:
Visually, the DDF house style can fall a bit flat from time to time. Heavy makeup, pastel color tones, and a heavy focus on wardrobe can make the scenes feel a bit sterile and artificial. The intensity of the bondage-infused action helps to mitigate this, of course, but it can’t completely solve the issue.

Similarly, the sex acts themselves can play out a bit more artificially here than on other DDF sites. Call it a hunch, but I suspect all the props, choreography, and careful attention to safety may have impeded the flow of energy between performers. At House of Taboo, some scenarios seem more about the concept than the pleasure.

Dig back through the archive son any long running DDF site and you’ll find content that looks quite weak in comparison to more recent productions. The same is of course true of House of Taboo. New episodes are vivid, rich in detail, and offer excellent viewing. Older scenes fall far short of UHD or HD resolutions and just can’t compete.

Conclusion:
Hardcore kink sites were a dime a dozen a few years back but the trend appeared to die off in favor of step-cest fantasies and one-on-one ass-fucking. House of Taboo still flies its freak flag high with around three updates arriving most months, a devotion to Ultra-HD video content, and a continually growing cast of expert fuck-freaks like Veronica Leal, Cassie Del Isla, and Kitana Lure. Updates could be made more frequently but there’s a strong enough archive here to keep you entertained (and amazed) for months on end. The inclusion of VR kink scenes helps push House of Taboo to a brilliant new level unmatched by most other kink and fetish sites, but it’s the crystal clear 4K content that really drives home how valuable this site is to the right viewer. No access to the DDF Network is provided to House of Taboo members but network subscribers to gain access to this site along with many others. Depending on the depth of your porn-loving depravity, a pass just to this site may satisfy completely. If not, the excellent DDF Network will handle this and all other porno needs beautifully.