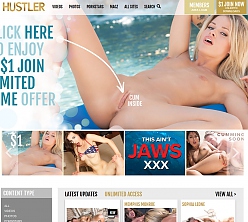 Overview:
Larry Flynt founded Hustler in 1974 as an extension of the newsletter he published to promote his strip clubs. Now, the company is arguably the strongest force in commercialized sexuality the free market has ever seen. Online with its eponymous flagship site, Hustler provides home viewers with the most direct connection to the greatest works of sexual entertainment the world-famous studio has ever produced, and often in High Definition, no less. Aiming to compete just as strongly in today's digital realm as it did in the days of cable TV and retail overload, Hustler (dot com) offers its subscribers everything from Summer Hustler Babe celebrations to outrageous interracial fucking, filthy lesbian porn, and all kinds of hetero and led-leaning hookups both high-budget and low, gonzo and narrative. As one of the biggest names in adult entertainment, Hustler recruits a killer cast of sexy performers (including Dillion Harper, Mia Khalifa, Nicole Aniston, and Chanell Heart) and puts them to work in the most salacious of situations. Promising untold riches of the sexual kind, rendered in Hustler's HD video frames and delivered to you, the antsy home viewer looking for sexual satisfaction online. Hustler usually charges $33.95 for a single month of access, but who knows, maybe that's a great deal and Hustler's reputation will be upheld. Or maybe, just maybe, this porno legend's star is fading fast. (Though I really doubt it!)

Pros:
Notable adult performers both female and male join Hustler to further explore their onscreen sexualities. Watching studio staples Nicole Aniston, Lexi Belle, Jayden Jaymes, Samantha Bentley, Alexis Love, and Marsha May, to name a small handful, is great fun as they seem to relish the chance to work for the legendary Hustler.

Hustler's videos were promised in High Definition containers and downloads make it closest with their high bit rates. Like streams, though, downloaded videos are limited to 540p resolutions. Photo galleries present awesome still shots that capture the steamiest, sexiest moments of a scene in 1500px frames online or in zipped downloads. New updates hit Hustler on a frequent, if not strictly regular schedule.

Hustler is home to some 4,500 photo galleries and nearly 12,000 individual videos all waiting for your to discover their loaded pornographic potential. Throwing around the term "network" a tad irresponsibly, Hustler offers up 18 additional sites including Hustler Parodies, Scary Big Dicks, and VCA Classics, and now accessible for the just $17.95 for your first month.

Oh, sweet! Another new release just landed on Hustler's homepage! Oh, wait, it's just Lisa Ann starring as would-be Republican VP Sarah Palin in the parody hit Who's Naylin Paylin?, not a new movie at all but one from 2008! "New" scenes and titles are not always newly shot, just newly arrived at Hustler HQ. Exclusivity issues abound, too, with former Evil Angel titles Suck It Dry and Facial Overload just a few of the nonexclusive titles now online.

If you're signing up to Hustler for the expected High Definition videos and the blistering sexual clarity they bring, think again. Hustler's HD streams and downloads only reach 540p resolutions and are barely classifiable as HD. It'd be great to see Hustler match its competitors more closely, pushing for 720p and 1080p streams in the near future.