Home · I Know That Girl 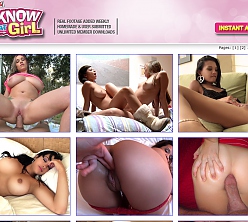 I Know That Girl review

Holding nearly 300 scenes, I Know That Girl is by no means small. Still adding new content on a weekly basis, the site is growing steadily although already providing plenty of quality smut. If it's smut you want (and mass quantities of it) then you'll be thrilled that your now-discounted (to $19.95) membership includes access to all other Mofos sites, from Stranded Teens to Real Slut Party.

Like most Mofos sites, I Know That Girl has been produced in High Definition formats for years. Nowadays, viewers enjoy streams offering 720p and 1080p HD resolutions both. Photo galleries are provided with all scenes and now offer 2000px images viewable in online galleries and slideshows or downloadable zip archives. Aside from a few minor issues including lack of video downloads, videos and photos both offer incredible views.

Cons:
Ok, so the women seen a-suckin' and a-fuckin' at I Know That Girl are not actually amateurs, but up-and-coming (sometimes even established) adult performers working a gig booked (presumably) by their professional agents or managers, a gig for which they'll be reasonably well paid. So, not amateurs, got it?

Strangely, neither scene synopses, nor keyword tags, nor model names not appear on a scene's viewing page, leaving interested members to try to recall what led to them selecting this particular scene or scenes in the first place. In fact, there's nothing on the viewing page aside from the content itself, comments from other members, and the main menu.