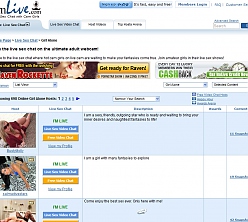 Face it: you're not the socially adept debonair ladykiller you always dreamed you'd become. That's ok, though, 'cause very few of us exist! Those still finding frustration as often as pleasure might turn to the live audio-visual intimacy of webcam shows. I'm Live presents more than 100,000 performers giving their all (and doing anything you can imagine) for your entertainment, arousal, and every hard-earned dollar (or, on the site, "credit"). What more could you possibly want?

Overview:
Wanting to share a live intimate experience with an otherwise totally inaccessible woman, you turn to the Internet. But with webcam sites coming out its proverbial ears and every Tumblr or Twitter girl with a comely body attempting to overfill their MyGirlFund or have their entire Amazon Wish List wiped out by a few over-amorous admirers, why would you want to actually pay for such an interaction? I'm Live might be free to join and peruse, but actually engaging its featured performers in frank sexual discussion or shared masturbation or a simple voyeurism show will cost you cold hard credits. Can you really afford to initiate a handful of new relationships with women who you'll never actually meet, touch, fuck, or not call back? If they do the things I'm Live performers have been known to do, sure, why can't you throw your money eagerly at this haven for debaucherous behavior. Shows vary in cost and are often accompanied by performer profiles, photo galleries, archived videos, and even competitions that result in the crowning of one especially popular performer, making I'm Live a potential adult entertainment gold mine. Will you make the most out of this pay-as-you-go porno wonderland or simply poke your head in for a closer look around?

Unlike so many live webcam sites, I'm Live doesn't suffer from huge variations in video quality. Many feeds are now coming from HD webcams, bringing clearler shots than you've likely seen elsewhere, but even those non-HD streams look quite good here, with only the occasional low-res disappointment. Frame resolutions average 480x360 pixels, but that's a misleading number.

Lots of pricing options give every viewer a chance to indulge in some I'm Live entertainment. Credits cost $1 each (in packs of 25, 50, 75, and 100) and now come with 25 bonus "Happy Hour" credits good for use on an inexpensive permanently running live. If you keep an eye on your funds and budget accordingly, I'm Live can be incredible value!

Cons:
Although there's plenty to see throughout I'm Live, actually finding the content you want can be something of a trial. Everything other than the basic webcam shows is tucked away under a tab or two, or behind three different menus. Search tools and options are unfortunately limited and lead to frustrating ventures with no satisfying result; upgrades are definitely in order.

Your credits can vanish pretty quickly if you're not careful and they're not exactly cheap when you're spending twenty minutes here, forty there in private shows costing 3.4 credits per minute. Be careful, fellas!

The design used for I'm Live is bland and completely lacking in anything resembling personality. The women aren't wrapped in a welcoming frame and the number of advertising and promotional banners and graphics clogging up most every page is seriously annoying.

Conclusion:
I'm Live offers many of the same thrills found on any decent adult webcam site: live interactions with genuine sexual deviants after nothing but your attention and your money is, well, basically the bulk of it. The additional, supplementary content provided by I'm Live manages to make the site seem a bit more personally engaging - absolutely necessary for any webcam venture - but that ultimately pales in comparison to the site's bland, lifeless, and extremely drab design. You can have 100,000 performers on your roster (as I'm Live does) and you can host more bona fide pornstar talent than Mark Spiegler's living room floor (as I'm Live does), but if your site isn't charming enough to be remembered by visitors (especially those who haven't yet ponied up any hard earned currency) then what's to make it stick firmly in their minds and pop up whenever an erection and some alone time looms? Still, if the aesthetics don't mean squat to you and you're just here for the pussy (or dick, or trans arrangement, or multiple peoples pink bits) then I'm Live and its extensive array of live talent should keep you fairly pleased.