Home · I Shot Myself 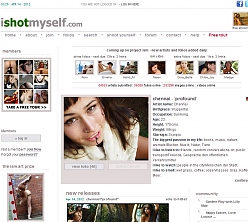 I Shot Myself review

Nope, it's not a site for death-fetishising gun owners, I Shot Myself is devoted to presenting everyday female sexuality in the most honest, sincere, and evocative fashion possible. And that, dear reader, means handing control over to the subjects themselves, the mostly Australian, mostly young, mostly white women grab a camera and shoot themselves in seductive nude poses that seem adventurous and perfectly natural at the same time. Although it is being held back (just a little bit) by its adherence to outdated video formats and image sizes, I Shot Myself is still one of the most identifiable and unique adult websites on the 'net.

Overview:
An article fell onto my desktop the other day detailing a supposed correlation between the number of Facebook "friends" an individual has and the size and power of two parts of their brain: the orbital prefrontal cortex and amygdala, respectively responsible for, among other things, cognitive processes concerning one's environment and regulation of emotions; the article attempt to establish a theory suggesting that those rampantly social people would have a higher understanding of social situations and the people they interact with. While I quickly called bullshit on the theory this "doctor" offered on his "psychology website," it did make me relish the days when I too had tons of Facebook friends. Those were carefree days when you didn't bother limited accessibility to your personal information and, best of all, a time when it seemed almost every hot young woman on Facebook was posting crude self-shot images of themselves looking like, well, tramps, really. I Shot Myself is a very different take on sexually-charged self-portraiture and hopes to elevate the form to something of an anthropological political sexual art project. Calling itself "an erotic, web-based, self-portraiture project where women from around the world submit a series of digital photographs," that must adhere to two rules: "the photo(s) must be taken by the artist herself...and they have to be naked." In other words, I Shot Myself is a journalistic collection of erotic self-portraits from everyday women, and one that'll cost you $24.95 per month to enjoy. If the sterling reputation of I Shot Myself is anything to go by, you won't regret a penny of it.

Now that digital cameras are in every household that's ever heard of the Internet, the quality of cameras used by I Shot Myself's artists mean you usually get resolutions of about 1280px that look quite good, especially for amateur content.

Cons:
Videos presented by I Shot Myself deal mostly in behind-the-scene footage of the artists shooting photos for their own folios. The videos, clearly shot by someone other than the featured artist, draw a divide between the women you see here and how they're presented. I Shot Myself is supposed to about self-expresssion, isn't it?

The 412-scene video archive really pales in comparison to the folio collection, which is now almost fifteen times the videos' number. Video content also lingers behind the images in resolution and image quality, sitting far away from real HD territory at 854x480 pixels. Though these videos look decent enough, there's ample room for improvement.

The impressive range of personal styles, methods, and ideas floating around I Shot Myself definitely make things interesting, but sometimes that can end up being just plain dull and unsatisfying.

Conclusion:
With its fast and frequent update schedule, large back catalog of galleries and videos, and some of the most intriguing adult pseudo-performers getting naked and showing off their bodies, their personalities, their sexualities in whatever way they choose, I Shot Myself is one of the most unique and compelling adult websites of recent years. As time passes, though, I Shot Myself seems to be lagging behind even its sister site I Feel Myself (a masturbation-focused endeavor) and should seriously be thinking about making some site-wide upgrades to both the photo and video material sooner rather than later. When the dust settles and the fat lady starts her caterwauling, I Shot Myself still can stand tall and proud as an eminently respectable adult endeavor that appeals to a higher level of sexual intellect than, say, Busty Construction Girls.