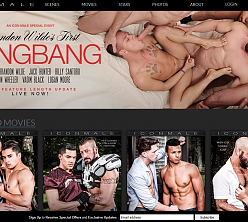 Pornographic iconography has existed for centuries, perhaps since even earlier than we've yet discovered. In today's hyper-sexualized world, sexual iconography is everywhere, including at the very appropriately named all-male hardcore site, Icon Male. Built around the works of the so-named studio, Icon Male crafts hardcore features complete with characters, plots, and even a denouement. Of course, the man-meat on display is just as impressive as the filmmaking of director Nica Noelle, and a cast of dozens of excellent studs are lined up to dazzle your senses and enflame your sexual desire. Complete with HD videos and twice-weekly updates, Icon Male is a commanding presence on the all-male porno scene.

Overview:
In the world of pornography, gay men are given short shrift. "Lesbian" performers are touted as cross-over superstars and given hefty exclusive studio contracts. Hetero performers are, of course, toasted above all others, making their way into pop-culture discussions and mainstream media. Rarely, though, do gay male performers break through as powerfully. There is one gay hardcore studio (and site) that aims to push its performers into the upper echelons of sexual celebrity. however, and it has named itself appropriately. Icon Male presents high-end erotic hardcore movies starring today's hottest and hunkiest M4M stars and studs and captures them in High Definition videos as vivid and inviting as the men themselves. Promising on its tour pages a wealth of naughty narratives and charming characters, directors (including legendary Nica Noelle) take great pride in keeping Icon Male's movies as sophisticated as they are deeply arousing. Titles like Football Hero, Straight Boy Seductions, Bad Little Boys, and Fathers and Sons give you an idea of the storylines at play, and the HD branding ensures you'll be gawking at high-quality imagery that's exclusive to Icon Male's archive. Normally priced at $29.95-a-month, Icon Male's price tag reflects its quality. Polish off you kneepads, fellas, 'cause there's plenty inside Icon Male to have you dropping to the floor in abject worship.

Pros:
Icon Male couldn't conceivable use that name if it didn't host extraordinary male performers. And, relax, it does! You'll find such rock-hard fuckers as Max Sargent, Andrew Fitch, Jaxton Wheeler, Nick Capra, Armond Rizzo, and Rodney Steele appearing here, alongside many others. And, truth be told, gay hardcore performers rarely get such a flattering showcase as this!

Shot in HD and delivered to you, the paying member, in 720p and 1080p resolutions, Icon Male's streaming and downloadable videos look a treat! Although they can drift too closely to darkness, most scenes have plenty of atmosphere and detail to the performers' surroundings, as well as the perfumers themselves, of course.

New Icon Male scenes (pulled from DVDs usually containing three-to-five scenes each) arrive here twice a week, on Tuesdays and Thursdays, adding to the nearly 150-scene archive already hosted here. And, as usual, Mr. Pink's can offer a discounted membership deal for your first month of access: only $14.99.

Cons:
Without an adequate search engine, Icon Male proves a bit tricky to successfully navigate. If you're searching for very specific acts of concepts that aren't included in the keyword tag list, you're left with no choice but to keep your eyes peeled and browse the entire archive in search of your perfect Icon scene.

Icon Male's devotion to a kinky atmosphere is commendable, but it doesn't always deliver great visuals. Some scenes are shot too dark and can leave you squinting to see explicit details. Photo content sits at 1920px maximum resolution and could use an substantial upgrade. It's a shame to let such richly rendered photos sit at modest size when 3000px and 4000px frames could deliver so much more.

Although they appear on a site called Icon, the featured studly male models aren't given detailed profile pages. Instead members are shown links to their online Icon content and nothing else. With many captivating performers featured here, this feels like a real missed opportunity to discover more about them.

Conclusion:
Icon Male's growing archive brings sophisticated narrative-driven pornography to the attention of gay, bisexual, and bi-curious men everywhere. Hell, these movies are so richly crafted and beautifully shot they'll likely appeal to many female viewers, too. Not exactly surprising, that, given lead director Nica Noelle has a history of acclaimed lesbian productions. In 720p and 1080p HD streams and downloads, Icon's movies offer crisp detail and strong atmosphere without losing those "Holy shit!" moments of hugely explicit images. The sex is well performed and proves the cast a very capable crew of fellas. In fact, they're so captivating, these guys, that it's a huge shame to leave them with basically blank profile pages. (Only Icon Male content links are provided, no model info.) It'll be great to see what Icon Male is up to, say, six months from now but even now this is a compelling, sophisticated, and very exciting narrative porn studio and one of the few all-male ones to achieve such ambitious gay hardcore.