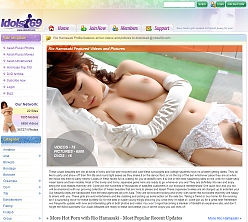 Once upon a time, worshipping false idols landed you in the lake of fire without a paddle (or, come to think of it, a canoe). In the age of the Kardashiass, however, idolatry is an essential part of pop-culture eroticism. Take the ladies of Idols 69, for example: Japanese beauties willing to bare their bodies and open themselves sexually for the entertainment and enjoyment of their fans. Truly these glamorous Asian hotties are among the most worship-worthy idols on the 'net and surely even you cannot resist their innumerable charms! Part of All Japanese Pass, Idols 69 is the naked, moist, and writhing catwalk of Asian porn.

Overview:
The Western World has popstars. Asia has idols. Just as Ariana Grande is a tool of the corporate profit machine, so too are Korean artists like 2NE1, Super Junior, and Psy, and Japanese artists Morning Musume, Kyary Pamyu Pamyu, and AKB48 tools of their respective entertainment industry's pop-cultural onslaught and agenda. Holding singers and dancers to an inhuman standard as if they were idols of the religious kind means, to many fans, pop idols can't shit, fart, blaspheme, do drugs, fall in love, or have sex. Idols 69 might not be filled with the genuine pop idols of Asia, but it is home to a bevy of beautiful, seductive Japanese harlots who've made having sex on-screen their main professional purpose in life. Also called "idols" by their fans, Japanese Adult Video (JAV) performers are celebrated in all their glory here at Idols 69, but this isn't the nipple-slipping paparazzi shoot-out you might expect. These lusty idols, both newcomers and legends of JAV, throw themselves into hardcore sex scenes more risque than you'd expect from a hoity-toity celebrity, more revealing than any tabloid gossip rag, and more explicit than anything any pop idol will ever do. Getting inside Idols 69 will cost you $29.95-a-month; not an exorbitant cost but certainly not one you'd want to spend rashly. Is Idols 69 worth it or is this yet another tepid JAV venture that fails to deliver?

Many Idols 69 videos look quite good even though they're not HD. Photos usually reach 1280px and can be viewed online or downloaded just like the videos. Unlike most other All Japanese Pass websites, Idols 69 provides users with an easy way to view only uncensored content. Click 'Uncensored Movies' in the left-side menu bar and you'll find almost 1000 totally uncensored scenes depicting full explicit hardcore acts, a real rarity in J-porn!

Cons:
Like so much Japanese pornography, most of that featured on Idols 69 has been hit by censoring watermarks, roving pixel clouds that distort what's behind them. Goodbye, vaginal canals! Goodbye, cum-spewing erections! Goodbye, gaping assholes! All of these things and more are now censored and cannot be seen in their natural states.

It appears no new content has been added to Idols 69's archives in a few months, since early August 2014. Where this puts the future of this site, I can't exactly say. Reoccurring periods of inactivity have prevented Idols 69 from seeing even more growth and this current update lapse is simply another of these small disappointments.

Whenever you find a lengthy scene introduction provides a chance to learn more about the featured idol babe as she speaks directly to camera or carries dialog with another performer, you're really being given the chance to test your Japanese comprehension. None of Idols 69's videos have been translated, leaving those who don't speak Japanese with no idea what's being said.

Conclusion:
Idols 69 is one of the strongest and most plentiful sites on the All Japanese Pass network, and its incredible collection of stunning JAV models doing hardcore is worth the price of network admission alone. Playing host to Japan's most exquisite sexual athletes and performers, Idols 69 brings you hardcore porn featuring all kinds of wide-ranging sex acts. Videos are not HD, but they do look quite good in 404p and 480p resolutions, as do photos in their 1280px frames (online or zipped). With network access boosting the already strong value of an Idols 69 membership, signing up shouldn't feel like a risk or a gamble, and the current membership discount deal will assuage any doubts you have. Still, with HD videos yet to arrive, updates needing some new energy, and censorship blocking many of the most appealing views, Idols 69 isn't without problems, just none so big you should stroll on by as if there's nothing of interest, not even a single face-plastered J-cutie, on this hottie-filled sexual playground.