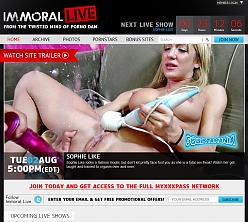 Some Immoral Live updates run no more than ten minutes while others stretch to well over an hour. These longer scenes can hit downloaded file sizes of well over 1 GB even at only 480p. Those viewers wanting the highest possible quality should start budgeting for a new hard drive purchase as the 1080p scenes eat up over 3.5 GB!