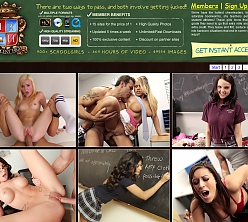 Back in the day, the most hedonistic part of school life was getting the cane from an elder in front of the assembled student body. These days it's all naked Snapchats and selfies and things like that. At least, it is in the real world. In Pornoland, high school is best typified by Innocent High, a site that sees eager or rebellious students vying for the special attention of their hunky teachers. Those teachers, putting their lives and livelihoods on the line for some fresh teenage pussy, should know better. You, however, should simply know Innocent High as intimately as possible.

Overview:
Good grades are hard to maintain, especially when your social calendar is loaded with trips to the mall, food court dinner dates, movie make-out sessions, and fucking your modern history teacher before and after every class. What, you still don't believe our high school are rife with sexual activity, some of it involving teachers? Do you even news, bro? Innocent High, a Team Skeet website solely concerned with classroom copulation, sees bratty students disciplined and dominated by their strict teachers, counselors, and headmasters in exclusive hardcore scenes. Allegedly loaded with 800 schoolgirls (including Jynx Maze, Mischa Brooks, Carmen Callaway, and Ariana Marie) dropping to their knees and earning their grades and teacher's good favor the old fashioned way, this heavily-loaded hardcore romp smashes taboos and will have you paying strict, stiff attention in no time. Short plaid skirts, tight white blouses, prefect pins and neckties on the outside; a barely repressed private school slut on the inside. Innocent High costs $29.87: far less than student tuition, obtaining your teaching certification and license, not to mention the hellish lawsuits you'd face if you actually banged a student. Better stick with Innocent High, pal. Trust me on this one.

Reaching both 720p and 1080p in downloadable MP4s and 720p in online streams, Innocent High's videos look a treat and capture all the classroom debauchery in clear detail. The colorful scenes and sets look great in HD, as do the foxy young ladies letting loose here and in the accompanying photo galleries, which can be viewed online or zipped and downloaded.

Home to some 387 scenes, this particular Team Skeet site is one of the largest. Innocent High members receive free access to the other 19 Team Skeet sites, of course, expanding their available archive by a huge margin. Furthermore, those eager to join the club can now do so for only $14.87-month!

Cons:
Updates are not made regularly, instead arriving anywhere from seven to forty days apart. Innocent High once updated every week and, although a bit unrealistic, it'd be great to see that schedule back in place, or at least a fortnightly compromise.

Sitting in frames of 1620px, the photos of Innocent High don't quite match the strength of the videos and could use an upgrade to more competitive resolutions. What's competitive? Well, many hardcore sites, especially European ones, are now posting images over 5000px - so, that or thereabouts.

Any site dealing with dominant men using their entrenched power to physically and sexually control those under their tutelage is bound to rub some folks the wrong way. If you're not into age-play, power-play, costume-play, role-play, or rough-play, consider yourself forewarned.

Older Innocent High scenes lack not only the High Definition videos of more recent efforts, but also their artistic quality and production value. Sets and costumes are far less convincing, as are performances. There's nothing to be done about this now, but it's worth warning potential members of the obvious shift in style and quality.

Conclusion:
Taking a leaf out of many men's personal fantasy catalog, Innocent High presents sexually aggressive young student sluts eager to turn their platonic teacher-student relationship into something a lot less socially acceptable. Although the sets, props, and costumes can be a little too colorful and outlandish to approach even a hint of realism, that's not what Innocent High is about. With a great roster of porn talent that features the best and brightest of 2014 and stretching back far enough to include many now-major players in some of their first scenes, it's clear Innocent High is a testing ground for new talents. They look great here, too, in 720p and 1080p HD videos. Photos are less impressive and could use significant resolution upgrade. Updates are more problematic here as they can and do leave as few as seven or as many as forty days between the arrival of new scenes. For Team Skeet's most established and reputable site, this update schedule is inexcusable. Thankfully, the rest of Innocent High is all too unmissable!