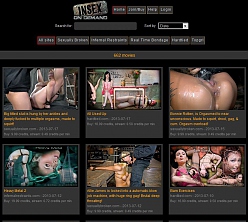 Pros:
InSex on Demand is a pay-per-view site that pulls the best of Intersec Studios' best and most powerful scenes and allows you to pick and choose which you'll view, only paying for those you actually watch instead of a whole sites worth. Pulled from Sexually Broken, Infernal Restraints, Real Time Bondage, Hard Tied, and Top Grl, there's plenty of extremely wild activity to be enjoyed here.

Videos look great streaming and downloading at 720p resolution in an HD MP4 format. Detail is high, colors are strong, and the all-important audio is crisp, clean, and powerful. Photo collections offer 1200px and are provided in zipped containers, each one containing two folders: Director's Pics and Scene Photography at about 80 pics each. Photos are clear, atmospherically lit, and quite strong.

Many InSex on Demand scenes are very affordable: they start as low as 6.99 (credits) and include many at slightly higher prices, all the way to up to the premium content. With credits costing about $1 each and discounts applying to larger purchases, your potential for saving is enormous!

Cons:
You'd think "buying" a scene would allow you some options, but no. Even when purchased, videos are offered in only one format and while it's a good looking 720p HD MP4, not everyone wants or needs HD. Any other video size or format at all would be a welcome addition.

Although many InSex on Demand scenes are very reasonably priced and affordable, others are downright ritzy! Would you really pay $24.95 for a single scene (even quite a lengthy one) when you can join and enjoy one of Intersec's sites for about the same price?

InSex on Demand holds plenty of scenes that are bound to be too much for some viewers. It's one thing to enjoy seeing a woman debased and degraded sexually, but it's another thing entirely to watch her reduced to a shuddering, drooling, incoherent mess of limbs, hair, and bodily fluids. Even the scene descriptions can be pretty volatile!

Photo galleries can only be accessed by purchasing the scene they correspond to; once purchased, a "Download photo zip" button appears alongside the video viewing options. No other viewing option is provided, not a basic thumbnail gallery or filmstrip or anything.

Conclusion:
As a primer on Intersec's style and sexual preferences, InSex on Demand is a fantastically kinky way to test these particular pornographic waters as a newcomer or find something truly exceptional for your experienced eyes only. As a site unto itself, one that should bring you ample thrills, InSex is, however, a tad disappointing. After all, there's only about a dozen scenes priced at $6.99 currently available, and the most enticing or adventurous episodes are usually priced much higher. Also disappointing is the availability of only one video format. Although it's a very attractive 720p MP4, other options would surely satisfy more users viewing on a variety platforms. InSex is loaded with on-demand thrills, yes, but only for very specific purposes and tastes. If you need to sample Intersec's huge array of BDSM and kink content or if you're not expecting to watch more than a few dozen scenes and can control your spending, you can't go wrong here. Otherwise, one of the company's regular sites would be a safer bet, pending your fetish's approval, of course.