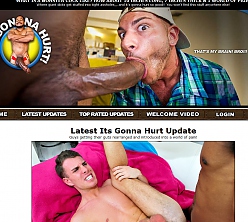 "It's gonna hurt," isn't exactly something you want an imminent sexual partner to utter mere moments before shoving a fleshy yule log in your anus, now is it? While you and I sit here and wince at the idea of such brutally sexy sex, the monster cocked brothers behind It's Gonna Hurt and laughing their trousers off thinking about all the tiny little holes they've busted open. Preserved for posterity at It's Gonna Hurt, the Big Daddy network's token super-dick site, these diabolically punishing angst-ridden ass-splitting gay hardcore scenes pack a hell of a carnal punch and you'll see it all in exclusive HD videos and photo galleries. You can't judge a book by looking at it's cover, but you can judge It's Gonna Hurt by reading the pained expressions on the faces of the bottoms, that's for sure.

Overview:
A friend of mine once told me the story of his first time, which happened to be with a man, and only one part of the story has stuck with me years later. When recalling the most vivid memories of his first stint as a bottom, my friend looked me in the eye and said, "Dude, it really fucking hurt!" No shit? Gee, you'd think shoving the fattest banana you could find into one of your body's most restrictive out-holes would be like whooshing down a water slide drenched not in water but baby oil, right? Just ask the gay boys getting plugged at It's Gonna Hurt, the Big Daddy network's resident monster cock site, and they'll likely tell you that even my sore-assed friend got it easy. Pushing their physical elasticity and endurance to the limit, the boys of It's Gonna Hurt take on some of the biggest black dicks you've ever seen. Lex Steel, Shane Diesel, and Short Mac be damned; Castro and Izzy, this gay hardcore site's main oversized performers, are where it's at. Bringing in a new guy each week and pushing, pushing, pushing until they stuff his throat and tickle his belly from inside, Castro and Izzy have lent their considerable size and skill to Big Daddy, all in an effort to get you, the home viewer and monster cock admirer, off. Are you willing to throw down the $29.95 required for membership and find out if they've succeeded? Before you do, why not loosen up and little, get some stretching done, and take every character of this review, Mr. Pink's first look at the painful but pleasurable It's Gonna Hurt?

Pros:
Who will you find at It's Gonna Hurt? Why, huge dicked star performers, black guys with tree trunks stuffed into their pants, that's who. They've been blessed with enormous dicks and they intend to use them to rather shamelessly intimidate more physically normal men willing to put their bodies to the test and take these monster black snakes to the hilt. Ouch!

Slamming it home with dynamic, powerful visuals in 720p HD frames, the streaming videos online here look very, very nice indeed. The massive dongs look fucking h-u-g-e as they worm their way into the inside of the quietly suffering (mostly) white boys.

Network access is the sole bonus available to It's Gonna Hurt members, but, boy is it a doozy! Accessing eleven of the best gay hardcore sites on the 'net is now easier than ever thanks to Big Daddy. And remember, the hundreds upon hundreds of Big Daddy scenes are just the bonus; It's Gonna Hurt itself holds 121 episodes and adds another one every week!

Cons:
I know this might come across as kind of bitchy, but, fuck, couldn't they have picked monster-dicked guys whose members don't make abrupt right-angled turns halfway up the shaft? Whether it's Izzy or Castro, I'm not entirely sure, but, man, isn't there surgery that can remedy that defect? It's not only displeasing aesthetically but it hampers performance, too.

Those of us who devour adult websites like Kobayashi devours hot dogs are probably used to opening many links in new tabs or windows of our favored browsing programs. I know I am. Unfortunately, tabbed browsing runs into a few snags here at It's Gonna Hurt. Try opening any link in a new tab and you'll be shown a bastardized version of the target page devoid of any videos or really anything useful at all.

It's a bit of a shame that It's Gonna Hurt has been completely swallowed up by and amalgamated with the rest of the Big Daddy network. This forces everything about this site to sway Big Daddy's way, from design to video formats and everything else, too. It certainly makes cross-network browsing much easier and I wouldn't give up the network access for anything, but this is a site with shitloads of personality now lost to bland ubiquitousness.

Conclusion:
Like its fellow Big Daddy websites, It's Gonna Hurt seems initially quite impressive, but soon shows its shortcomings. Streaming-only videos won't be met with much excitement from the members, I'm sure. Even though downloads are being added to other sites on the network - far too slowly, I might add - they haven't yet been integrated into It's Gonna Hurt's viewing options. This site has also been so heavily integrated into Big Daddy that is has lost much of its inherent personality. Thankfully, the scenes themselves, while far from perfectly cast, manage to present hardcore gay sex, both oral and anal and most everything else two grown men can get up to by themselves, in a style that is both physically punishing and irreverently humorous. The bottoms, bless 'em, seem to handle the enormous monster cocks as well as anyone could expect them to. It's Gonna Hurt isn't the smoothest butt-fucking site on the 'net but it does offer some fascinating and extremely enjoyable niche smut for an attractive price, and with one hell of a bonus, too: complete Big Daddy network access. All in all, not a bad package! (That's what he said. Oh.)