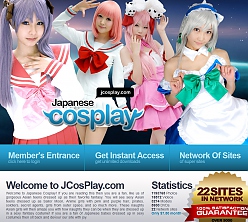 You may have tried your hand at being a Firefighter one Halloween and made it with a foxy Ariel, a real redhead to boot, but you've never seen costumed sexual shenanigins like those available at JCosplay. Home to nearly 800 scenes that prove nobody gets as excited than the Japanese when it comes to dressing up as cartoon animals, historical figures, or even spiritual icons to amplify an already super-hot sexual experience. JCosplay might not be HD-equipped or filled with photo galleries but it's a very colorful and sexy romp through Japanese pop culture all the same.

Overview:
Here in the Western World, our sexualization of certain uniforms and costumes has been fairly limited. Firefighters, police officers, and construction workers have historically been the male costumes to woo the ladies, while ladies have in turn found nurses, maids, and "Princesses" the strongest attractors of male suitors. In Japan, however, the breadth of costume use for fun and carnal adventure is much wider, covering everything from anthropomorphic cartoon creatures and vintage kimonos to full-body vinyl suits, demons, superheroes, robots, pop idols, medical personnel, space explorers, and even religious icons turned sexual deities. Truly Japan is home to some of the world's most out-there pornography and JCosplay seems like a great place to get acquainted with your new and extremely kinky surroundings. Part of the All Japanese Pass network, JCosplay takes you through a virtual cosplay parade and invites you to choose your favorite girl, costume, or character then indulge in seeing her stripped, spread, and fucked in streaming and downloadable videos. JCosplay claims to deliver daily updates, fast downloads, and unlimited downloading but makes no mention of High Definition videos. Will we be stuck watching these delightful Japanese costumed hotties in crummy standard-def or are the HD visions tucked away inside and only available to those paying $29.95-a-month for JCosplay access? Whatever the case (and whatever the video quality), at least we know for certain that JCosplay is more overly sexual than your average Halloween shindig or any comic convention you'd care to name.

Pros:
JCosplay features many delightfully sexy young women all gussied up in costumes based on pop culture icons from anime, manga, music, movies, and all kinds of entertainment sources. From Sailor Moon to AKB48-inspired outfits, the likes of Rinon Miyazaki, Mayu Marida, Tsugumi Mutou, and Mako Mizuhara look bright, colorful, and very enticing in their various costumes.

Holding nearly 800 episodes ranging in duration from six minutes to sixty, JCosplay holds a wealth of costumed and role-playing J-porn thanks to its daily updates and four years of online life. In celebration, Mr. Pink's and JCosplay have teamed up to bring you a killer offer: one month of JCosplay and All Japanese Pass access (to an additional 23 websites) for only $19.95!

Cons:
Even though there was no mention of it on the tour pages and, inside the members area, preview images are free from interference, censorship is in play throughout JCosplay's archive. Uncensored content is also online (thank god) but lacks a navigation tool to connect directly with viewers.

JCosplay might be devoid of any real High Definition video content - video resolutions peak at 720x404 pixels whether streamed or downloaded - but at least it didn't lie on its tour pages like some other All Japanese Pass sites. The video quality here ain't exactly stunning, but it does the trick while awaiting an HD upgrade.

It could be argued that erotically-inclined cosplay works much better in still images than in videos, but as JCosplay has deemed photos unworthy of inclusion here, you'll have to head off and find cosplay photo galleries elsewhere.

Conclusion:
There's something very arousing about a woman who gets dressed before sex, especially when she's donning a colorful, eccentric costume that pays tribute to her (or your) favorite pop culture character. Ever fucked a girl dressed as Sailor Jupiter or peeled off a mermaid tail before diving for pearls? If not, JCosplay could easily depress you, showing you what you've been missing all these years. The sex is as varied here as the costumes, and girls are shown blowing roomfuls of guys, giving soapy full-body massages, soiling the water in a public bathhouse, and taking loads internally and externally in all orifices and on all surfaces. Without HD videos or photo galleries, though, JCosplay's brightness dims a bit. Connecting its members to the rest of All Japanese Pass, JCosplay is worth the price of entry if only for this network access, but its costumed carnality is very entertaining, censorship and lack of HD, be damned.