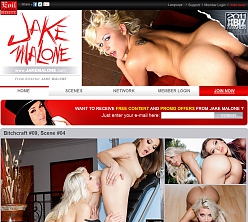 The best looking videos presented here at Jake Malone reach 720p and 1080p resolutions and look stunning in glorious High Definition. You're given ample detail and plenty of opportunity to ogle the women's fine bodies, in or out of leather, straps and chains. Photo galleries look similarly good, offering 1920px images.

Cons:
While Jake Malone's site offers a fairly strong collection of 238 scenes, only 30 of them are rendered in High Definition. The others, I'm afraid, don't look anywhere near as clear, vibrant, or crisp as the HD offerings; there's not only a technical visual disparity but one of production value and aesthetics, too.

Once updates were arriving on a weekly basis, but that's no longer the case here, I'm afraid. Nothing new has been added to Malone's online archive in two months, but this delay is far from unusual and there have been similar lapses in the past.

None of the photo galleries available here offer a downloadable zip package, forcing hoarders to manually open and save every image they wish to keep, a very time consuming and tedious task, for sure. While there are only 73 regular photo galleries, most movies come with a smattering of additional images found on the video viewing pages, but they're unfortunately quite brief and not all that interesting.

Distributed through Evil Angel, Jake Malone's work can be seen on the shelves of every decent adult retail establishment, as well as on other sites, Videobox being the most prominent and popular. Don't expect to see a huge stash of exclusive content on his own site - he's just too popular for that.

Conclusion:
While not as well known as some of his fellow Evil Angel directors, Jake Malone is definitely a deft hand at creating porn scenes that'll linger in your sexual imagination long after you've beaten off and left them in an intentionally mislabeled folder somewhere on your handy external hard drive. His kinks and fetishes work perfectly with his performers to create extremely adventurous and daring scenes. Although few of them are delivered in High Definition formats, those that are look exceptionally good, with clear, precise images bursting through your screen. Updates have once again stalled and Jake Malone is now at what I hope is the end of another two-month stint of inactivity. If only the guy could be as prolific as he is perverted, his members would no doubt be infinitely more pleased with this site.