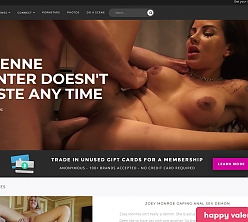 Shot in HD and 4K formats and seen here in streaming and downloadable videos usually offered at 480p, 720p, and 1080p resolutions, Deen’s work covers a range of visual styles but always delivers strong detail. Even in dimly lit night shoots, the atmosphere and sights work together for a great hybrid amateur-professional feel. Photos, too, look good, hitting 1600px at their best both online and in zipped sets.

Along with the main collection of more than 500 hardcore scenes, James Deen’s site also offers such fangirl-tickling oddities as custom burrito creation videos, fast food reviews, and pussy-eating-only episodes. Updates land on the homepage every four days and, now discounted to $19.95, is a damn good deal.

Cons:
It almost goes without saying to any porn-literate person, but James Deen is a highly controversial figure and has left many former fans very disappointed and ultimately uninterested in his work. Those folks, and anyone edging toward that position, will no doubt find this site hard to tolerate, let alone enjoy.

It’s not just his tarnished reputation that has Deen’s website potentially turning viewers’ stomachs, it’s his performance style too. It seems the man can’t decide if he wants to be the next Manuel Ferrara, Pascal White, or Max Hardcore. Domineering and aggressive one minute, quiet and tender the next, and often heard grunting towards an orgasm, Deen’s style won’t suit everyone, especially those who want the focus on the women.

Some scenes are shot in very low light and even with a night vision lens. While this makes for some fun visual experimentation and can lend to the naturalistic feel of the more amateurish scenes, it can also make it just plain hard to see the juiciest bits of the action.

Most of the current updates and recent archived items are original and exclusive productions only available to Deen’s own subscribers. Dig back a bit, though, and you’ll start seeing occasional licensed updates that, although starring Deen and even directed by him, were originally shot for other studios or sites.