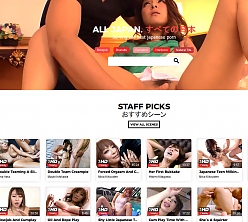 Overview:
The island nation of Japan is not only known for its long-standing remove from the Western World, its panty-filled vending machines, the world’s best noodle soups, and some truly kinky sexual subcultures, but also for its world-leading take on technological advances and innovations. One technological leap forward arrived with the advance of High Definition video capture and playback and, predictably, much of the early HD content came out of Japan. At Japan HD, you won’t find sporting events or fashion shows or games shows, but adult entertainment usually kept under wraps in Japan. Almost always censored, Japanese hardcore porn is at once hugely popular and an unfortunate joke, but Japan HD, with its promise of uncensored High Definition hardcore fuck flicks ranging from one-on-one POV porn to wild bukkake-laden gangbangs, aims to change all that. Hiding nothing and revealing all, Japan HD is part of the illustrious Stiffia network and aims to bring its subscribing members a bevy of sexually-varied J-porn in top quality packages. Can this enticing Asian hardcore effort convince you to throw down the required $29.95 for monthly membership? Mr. Pink intends to open up the virtual doors of Japan HD’s online archive and find out once and for all.

New updates land at Japan HD every two, three, or four days, adding to the decent and growing collection quite steadily. The archive currently holds 374 individual scenes pulled from 45 officially released DVD and Blu-Ray titles. With monthly access charges now slashed in half, Japan HD is even more tempting than usual.

Cons:
It almost goes without saying but with scenes sourced from DVD and Blu-Ray releases, very little if any of Japan HD’s archive is exclusive to this site. In fact, I’m sure I’ve seen a few of the hosted scenes on other JAV megasites. The content might not be exclusive, but Japan HD remains a tidy and convenient package.

Although some titles have seen Ultra-HD Blur-Ray releases in the home video retail market, Japan HD’s featured videos nevertheless peak at 1080p, not reaching Blu-Ray quality. It’d be awesome to one day log in and find a wealth of UHD updates, but that still seems a long way off. Videos are also labelled in a way that may confuse viewers: a “1920p” video is, in fact, 1920x1080p and not UHD as implied.

Japan HD’s tour pages, loaded with lusty previews of Asian babes being fucked every which way but boring, make mention of a daily update program. Unfortunately, updates are actually arriving less frequently than promised, landing roughly every three days, not daily. About two full DVD or Blu-Ray titles are added every month.

Closely connected to the dozens of other sites calling the Stiffia Network home, Japan HD doesn’t quite place you in a pornographic vault of epic proportions. Instead, it places you at the door to said vault, asks you to wait a while for access, and entices you to take a short cut by paying for viewing privileges.